As a former federal politician, television commentator, footballer and coach, Phil Cleary is used to having a voice, which is why he is relieved his request to give evidence at the murder inquest of a woman he never met has been approved.

On September 6, the Coroner will open a three-week inquest into the murder of Maria Theresa James, stabbed to death inside her Thornbury bookshop 41 years ago. 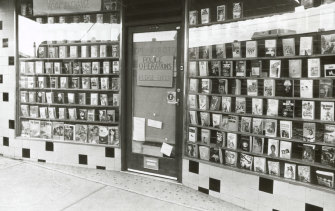 The Thornbury bookshop where Maria James was murdered in June 1980.Credit:The Age

I covered the case as a young reporter. It was my first murder. It has never left me.

James, 38, owned the modest bookshop in High Street, Thornbury. The front room was filled with hundreds of second-hand paperbacks and magazines wedged in shelves. Behind the small counter was a tiny three-bedroom home where she lived with her two sons.

On June 17, 1980, she was stabbed 68 times in her bedroom. The front and rear doors were locked and two coffee cups on the counter indicated the killer was known to her.

A couple of years earlier, when I worked up the road at the Croxton Park Hotel, I would pass the bookshop on the tram. The windows were blocked with books and I always planned to stop and explore. I didn’t – not then.

When Homicide set up their investigation inside the shop I was invited in by the then deputy head of the squad.

There was a small kitchen and in the bedroom were the signs of violence: the carpet was stained with blood and fingerprint dust on doors and windows.

Within three days the government announced a $50,000 reward – the quickest ever recorded. This was because police feared the offender could strike again. Today, with shopfront CCTV, phone records and modern forensics, the murder would have been solved in days. Back then it was a case littered with false hope and dead ends.

Phil Cleary didn’t know Maria James but is desperate to know if there is a link to the murder of his sister Vicki, stabbed to death seven years later.

Vicki’s murderer, Peter Keogh, was only convicted of manslaughter after claiming he was provoked, an obscene conclusion that blamed the victim for her death. Keogh would serve less than four years. 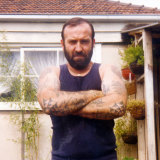 Keogh had been Vicki’s partner and began to stalk her after the relationship ended. At 7am on August 26, 1987, he went to the Coburg kindergarten in Cameron Street to lay in wait for an hour until Vicki arrived for work.

When she pulled up he attacked, first trying to strangle her, slashing her face (classic hate injuries), then stabbing her repeatedly in the abdomen, leaving her bleeding to death in the gutter.

Keogh is a suspect in the Maria James case and Phil Cleary believes he will speak at the inquest for his dead sister and hundreds of other family violence victims.

Eighteen months after the James murder, when police issued an image of the offender (resembling Keogh) two women rang Crime Stoppers nominating him, adding he attacked their sister with a knife. This victim was Judy McNulty – Keogh’s alibi witness who now believed he was guilty. The tip was not passed on to Homicide.

The police identikit that prompted two women to nominate Keogh as the killer.Credit:Victoria Police

If it had been, Cleary contends, Keogh would have been charged with his latest knife attack and become a major focus of the James investigation. Forewarned, he says, Vicki wouldn’t have formed a relationship with him.

Keogh is not the only person of interest. There were dozens, with the list now whittled down to less than 10.

Both Bongiorno and Keogh were falsely cleared by DNA tests – only for police to later find the sample was from another crime.

There was the slightest glimmer of hope when the bloodstained quilt, misplaced by police for decades, was found. If the offender left a DNA trace it could be a breakthrough, but for a host of scientific reasons it is a long shot. Like so many leads, it may lead nowhere.

James’ son Adam says he told his mother days before the murder that he was molested by the priest.

Police have been told James planned to confront Bongiorno on the day of the murder.

More than 30 years after the killing, a witness has come forward to say that on the day of the killing he saw a man matching Bongiorno’s description entering the church grounds with blood on his face.

Despite the blanket publicity, he didn’t at the time connect the bloodied man with the murder less than 100 metres away.

I spoke to Bongiorno hours after the murder, who described how he told James’ eldest son, Mark, that his mother was dead. “We both had a bit of a sob together,” he said.

Bongiorno died of natural causes in 2002.

James remained close to her ex-husband, and they spoke regularly about their children, yet she did not share her suspicions on Bongiorno.

She was bashed three times and her throat cut. Her wrists were bound in front and her body covered by more than 60 nicks and cuts. She was moved three times and a coffee table overturned and broken. Police said she was tortured, “obviously by a maniac”.

The injuries were not consistent with an offender who wanted to silence his victim but one who attacked with venom, determined to hurt and humiliate; a power crime.

On the day of the murder Bongiorno was happy to be photographed by the press – a massive risk if he was seen leaving the bookshop after the murder. 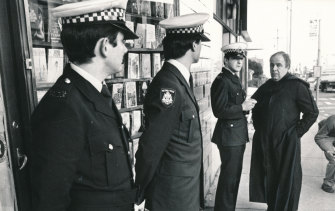 The man believed to be the killer was seen running across High Street. But the church is on the same side as the bookshop, which means if it was Bongiorno he crossed the busy street not once but twice. But by taking that route he would have avoided running past the Catholic school, where he was well known.

The initial police profile of the killer was someone who knew Maria James, lived locally, had an explosive temper and a hatred of women. After interviewing witnesses police released a description of a man seen running across High Street. He was paunchy, about 167 centimetres, with dark hair and wearing light grey trousers. 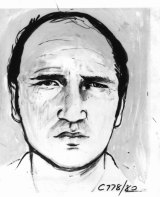 Photofit of the man seen running across High Street.Credit:Victoria Police

James told friends she was seeing a man named Peter. Police were to find three Peters who knew her. None were Peter Keogh.

Police received four separate tips that Keogh was the murderer. He fitted the description, was 167 centimetres, hated women, had an explosive temper, had a prior for tying up females and an obsession with knives.

Within days of the James murder, a local florist told police an unidentified man bought carnations to be delivered to the bookshop, asking her to write the card. Keogh was borderline illiterate.

Two women who experienced his violence also received flowers from him – always carnations.

He lived in the area and was a regular at the Junction Hotel, just up the road from the bookshop.

Years earlier he attacked a man in the bar with a broken glass and was sentenced to one month’s jail.

Interesting but not compelling. In fact, no one confirmed James and Keogh ever met. Yet there were plenty who suspected the brooding former meatworker.

Twelve years after the James murder he dated a Junction Hotel bar staffer (he subsequently tried to burn her house down). Three times a regular at the bar warned her, saying Keogh “killed the girl at the bookshop”. Another said: “He did Maria James, she was his missus.”

On June 23, 2001, he went to the pub and confided to a bouncer: “I’m going to neck myself.” It was the anniversary of Maria James’ funeral.

He drove to his Mansfield Street home, put a hose into the car and gassed himself, a bottle of bourbon his only companion. Maria James’ bookshop was one from the corner of Mansfield Street.

Vicki Cleary confided to a friend that Keogh had threatened “I will do to you what I did to the woman in the bookshop”.

Even counsellors need counsellors and when psychotherapist Margaret Hobbs needed to talk she turned to her mentor, Dr Jim Goulding.

Days after the bookshop murder, she rang to discuss one of her clients: Peter Keogh. 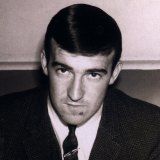 “She said, ‘I know that bastard did it. He told me he was going to get her’,” Goulding recalled. If Hobbs was right, it would mean Keogh knew James. But both Hobbs and Goulding are now dead.

Goulding tipped off police and in August 1980 Keogh was interviewed by Homicide detectives. His girlfriend, Judy McNulty, provided an alibi that was later discredited.

Homicide detective Frank Bellesini wasn’t part of the bookshop team but when he heard a witness describe a suspect as having a limp, he nominated Keogh.

Bellesini knew why Keogh had a distinctive gait. As a young constable 17 years earlier, he had been called to the stabbing of a Northcote railway station porter. Bellesini saw a youth matching the offender’s description at Preston Station. It was Keogh.

He pulled a knife and attacked Bellesini, slashing the policeman’s palm. It was a classic case of taking a knife to a gunfight. Bellesini produced a small Browning .32 pistol – “a peashooter, really” – and shot his attacker in the kneecap.

When told Keogh had an alibi, he wasn’t convinced. “I suspected it was him, but it wasn’t my case, and it wasn’t my job to stick my nose in.”