They’re a long way from the plain old Penny Black issued more than 180 years ago.

These latest vibrant designs show the Royal Mail has changed a lot since 1840 – with what may be its most inclusive stamps ever.

The company has issued a set of eight stamps to mark the fiftieth anniversary of the UK’s first Gay Pride march. Using the bright colours of the LGBTQ+ rainbow flag, the stamps tell the story of Pride since the first rally in July 1972.

They images feature people of different ages, ethnicities and religious backgrounds as well as a wheelchair user. The more recent update on the traditional rainbow flag is also included, its design encompassing the flags of trans and intersex people. 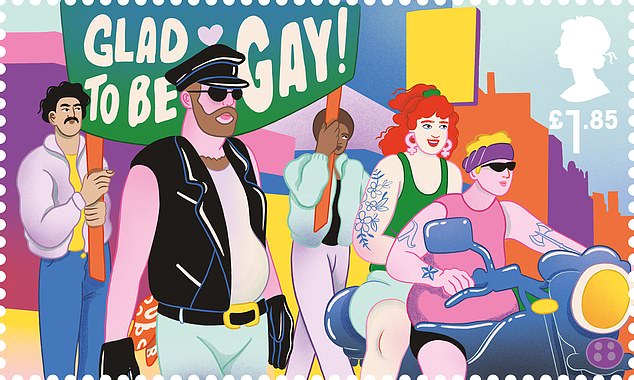 These latest vibrant designs show the Royal Mail has changed a lot since 1840 – with what may be its most inclusive stamps ever. 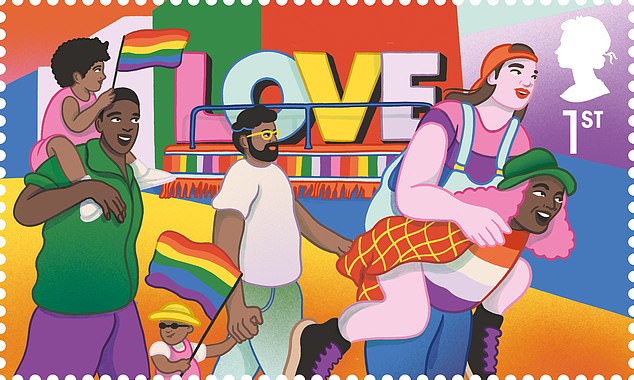 Royal Mail today revealed images of a new set of eight, vibrantly illustrated stamps, being issued to mark the 50th anniversary of the UK’s first Pride rally that took place on 1 July 1972

It comes as Royal Mail bosses make a concerted effort to modernise and reflect British society.

The Royal Mail’s director of external affairs and policy, David Gold, explained the bold move, saying: ‘The vibrant, colourful Pride events that take place in towns and cities across the UK today trace their origins to a small number of people who marched through central London half a century ago to raise awareness of discrimination and inequality.

‘There have been huge changes in laws and social attitudes, but Pride events continue to play a key role in raising awareness of discrimination, as well as celebrating diversity and individualism.’

The first march in London was inspired by events in the USA, where the first Pride events had taken place to commemorate the anniversary of the Stonewall riots in New York. 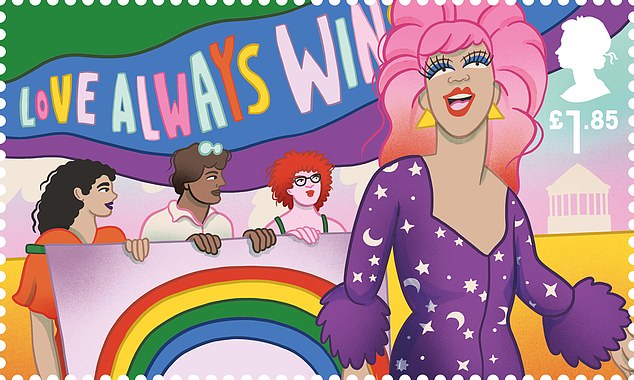 Issued exactly 50 years to the day, the stamps celebrate the march that took place from Trafalgar Square to Hyde Park, which was the first to bear the name ‘Gay Pride Rally’ The stamps, specially commissioned by Royal Mail, were art directed by NB Studio and illustrated by award-winning artist Sofie Birkin

The Royal Mail heralded the innovation, which involved consultation with its own staff, saying: ‘The spirit of Pride was one of defiant visibility.

‘At London’s first event there was even a ‘kiss-in’ – a mass display of same-sex affection, while people at early Pride events chanted slogans such as, ‘Gay is fun! Gay is proud! Gay is beautiful!’

The organisation said the stamps are designed to mark major landmarks over the past 50 years including efforts to combat prejudice and abuse as well as achievements such as the legalisation of same sex marriage.

As part of the initiative, the Queen singer Freddie Mercury’s childhood stamp album is to be displayed at London’s Postal Museum.