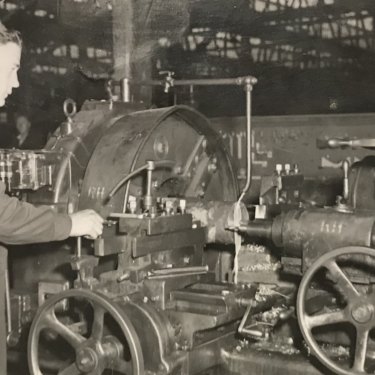 Patrick Joseph Bricknell, known as Pat, was a fitter and turner with the railways.

hey were men who helped to shape and build the city of Melbourne as it boomed. Here, we honour the lives of two men as we continue The Age's series in memory and celebration of the people taken by coronavirus.

It was when his children compiled a list of the Melbourne landmarks Jure Carapina helped to build that they were reminded of the enormity of their father’s legacy.

The "strong and stoic" steel fixer helped construct the Rialto skyscraper, Collins Place, the State Bank of Victoria, and projects which spurred movement around the booming city, the City Loop and West Gate Bridge. 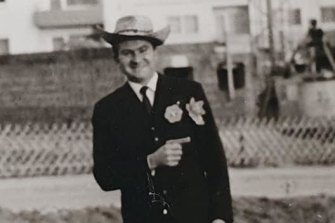 Jure Carapina was born in 1939 in Yugoslavia.

Each night on his return home, he would have a shot of whisky as he told his family of the sprawling tunnels being built beneath the CBD and the towers soaring into the skyline.

“He helped build the foundation of our beautiful city,” says daughter Ana.

It was a city far from Jure's birthplace, a barn surrounded by mountains in Vrdi, a village in then-Yugoslavia, in 1939.

He was raised by his grandfather and aunts after he lost both parents during WWII.

“He had a lot of heartache and he lost a lot,” says his oldest daughter Ilka. "So he put a lot of stock in family."

In the late 1960s, he spent three months’ wages on a flight to Melbourne, where he met a girl whose name meant Rose. Within six months, Jure and Ruza were married. 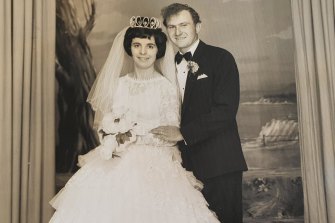 Jure and Ruza Carapina on their wedding day.

Jure worked in construction for decades, drawn to the camaraderie of the job. He was talented at his trade, claiming the title of the quickest steel fixer in 1976 while working on the Newport Power Station.

On October 15, 1970, he was working on the West Gate Bridge when it collapsed, sending thousands of tonnes of concrete and steel deep into the mud along the Yarra River. Thirty-five workers were killed.

“A week before it collapsed Dad got assigned to the opposite end of the bridge,” says son Ante.

“The noise was deafening. He knew quite a few of the men that died, and he knew some that survived. He talked about how some men who fell in an exposed external lift actually survived after the cage was embedded in mud. They survived because they were in the lift at the time."

One month after the tragedy, Jure and Ruza welcomed their first child, Ilka. The next eight years brought them two sons, Ante and Ivan, and their youngest daughter Ana. 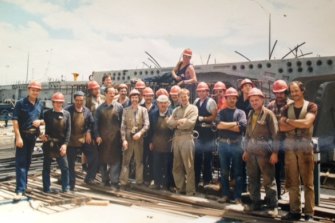 Jure Carapina (far left) working on the West Gate bridge when it was extended to Kings Way in the 1980s.

Jure always found time to do the things that made him happy: playing cards with friends, or working in his smokehouse, where he cured meats such as prosciutto and cevapi (skinless sausages).

He loved tending to his vegie garden and visiting the family's hobby farm in the Macedon Ranges.

"Our parents generation were more sustainable," says Ilka. "You didn’t throw things away, you tried to reuse things as much as possible.

“We always had chickens growing up. I think I was well into my 20s before I tried eggs from supermarkets. And I thought, 'These are not right'." 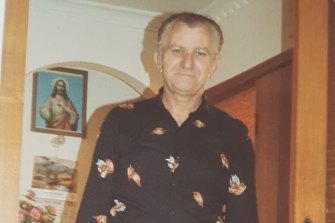 Jure Carapina worked as a steel fixer for decades.

“Mum and Dad also used to make pickled cabbage, sort of like sauerkraut, but it was whole cabbages so they'd use a barrel. I remember going everywhere trying to find a barrel that would be food grade."

Jure and Ruza were inseparable, both passionate about instilling a love of their cultural heritage and education in their children.

The family were heartbroken in 1992 when Ruza passed away from bowel cancer aged 50. Jure never remarried, believing a soul mate was for life, says Ana. “Very quickly he had to learn how to raise his children including two teenagers.”

In his later years, he was happiest surrounded by family.

“None of us could compete for his smile when the grandkids were in the room," says Ana. "They loved the way he would twirl his moustache with his cheeky smile." 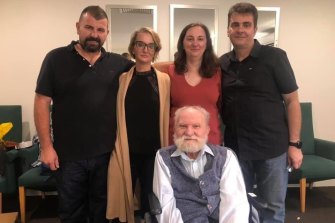 Jure with his four children, Ante, Ana, Ilka and Ivan.

He was diagnosed with Parkinson’s disease in 2005, and moved into Arcare aged care in Sydenham in 2014.

He contracted coronavirus on August 17.

Three of his children had 10 minutes to say goodbye to the man who had raised them and loved them for decades, while his youngest daughter- stuck in quarantine overseas – had to say goodbye over video.

His children, who always thought their father would live to 100, are devastated.

"He was the one that helped raise us. The one that was there," Ilka says. "He was our dad."

Pat Bricknell was 21, a fitter and turner with the railways, when he met the auburn-haired girl who would share his life.

She was named Rita, a telephonist with the Melbourne Post Office.

When they met, Rita was attending a wedding in the company of Pat’s brother Brian. 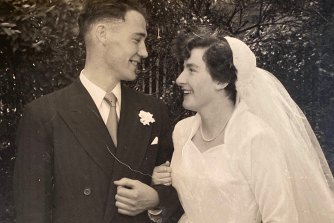 Pat and Rita Bricknell on their wedding day.

Within three months, Pat proposed, and in 12 months, he and Rita were married. No one in the family quite knew how Brian felt about this, though they noticed relations between the two brothers became distant, and stayed that way.

Pat and Rita Bricknell were inseparable to the end, 65 years later.

Pat “was what you would call a hard-working blue-collar Australian man”, said his daughter Joanne Podger. He was a romantic, too.

He and Rita lived with Pat’s parents, Fred and Vera, until a housing estate opened in the brand-new suburb of Reservoir.

The couple bought a home and lived there for 30 years, raising three daughters, Suzanne, Joanne and Donna.

Pat worked hard for an engineering company in Preston, and made sure his family lived comfortably by taking a second job as a cleaner at night.

Rita never drove. In his scarce spare time, Pat ferried his daughters to parties, dances, concerts and friends’ places. Weekends, he devoted time to caring for his elderly parents.

When Pat retired, he and Rita moved to Rosebud. But serving others was in their blood.

Pat and Rita took to cooking meals for the homeless at Vinnies Kitchen, and Pat regularly drove cancer patients from Rosebud to Melbourne for treatment.

Eventually, Pat and Rita moved to a retirement home in Sunbury.

But when Rita, burdened with dementia, began deteriorating, the couple shifted to the Goonawarra Aged Care Home in Sunbury. 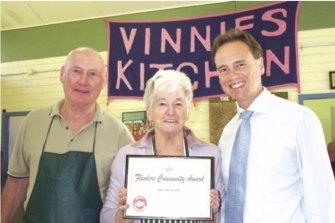 Rita receives a Flinders Community Award for her work at Vinnies Kitchen with Pat.

Each morning Pat, physically fit and mentally sharp, ambled to Rita’s room, helped her prepare for the day and sat with her, holding her hand and offering his shoulder for her to rest her head.

The staff dubbed them “The Notebook” couple – a reference to the 2004 romantic film of that name.

Still, he determined there was life yet to be lived.

Pat continued donating to charity – he sponsored two children with World Vision, and sent monthly contributions to Medecins Sans Frontieres, the Salvation Army, the Flying Doctor Service and the Peter MacCallum Cancer Centre, among others.

He read widely and took some delight in outsmarting contestants on the TV show, Who Wants to Be a Millionaire?

On December 24 last year, Pat celebrated his 90th birthday at a Sunbury wine bar, surrounded by his daughters, sons-in-law and their families, which ran to seven grandchildren and 13 great grandchildren.

Pat, tech savvy, kept in touch with his family through Skype on his iPad. He said he intended to stay around for a telegram from the Queen when he turned 100.

But the virus was exhausting him.

The Age welcomes submissions from families or friends who would like to pay tribute to those taken by the pandemic for inclusion within this series.