Chi-WOW-a! Tiny dog is spotted wakeboarding behind a boat in Mexico

This is the adorable moment a pet dog was seen wakeboarding – being pulled behind a boat with its owner in Mexico.

Footage shows the tiny dog balancing on his own little blue board while the motorboat travelled ahead on them on the river in Alvarado, Veracruz, on May 2.

The unidentified pet owner and his dog passed under the bridge while practising the extreme water sport together. 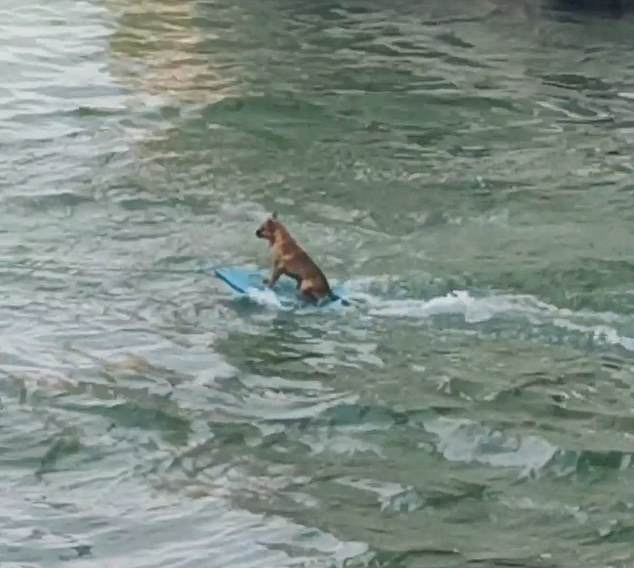 Hugo Severino was walking along the bank of the Papaloapan river in Alvarado, Veracruz, on May 2 when he saw the dog, pictured, being towed on a blue wakeboard behind a motorboat

Amused locals diving from the structure to cool off in the water stopped in amazement to watch the cute pair enjoy their weekend recreation on the Papaloapan river.

Onlooker Hugo Severino said he was walking along the shore with a friend when the boat passed by and they noticed the spectacle.

He said: ‘I was walking along the embankment when a person told me about the dog.

‘At first I only saw the motorboat then I noticed the cute dog following behind on a board. He was so cool.

‘My friend and I enjoyed watching them. It made our day.’

Mr Severino said that the motorboat left after passing by but the dog and the owner are well known in the area.

He added: ‘I heard they usually visit here. People told me they are very close and are always doing things together.’ 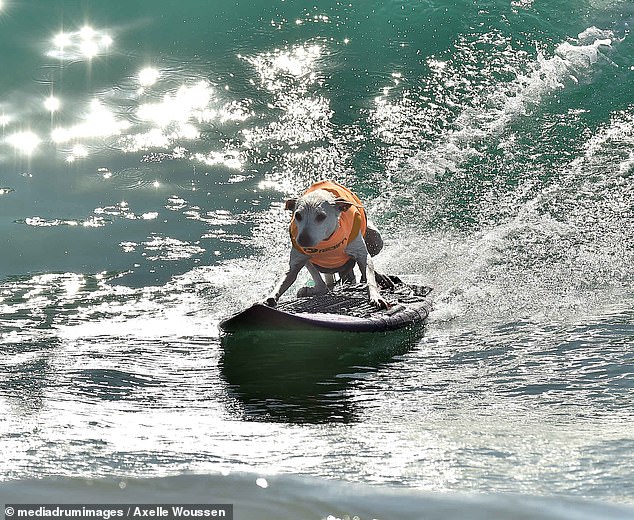 The unidentified dog could have been inspired by atalented eight-year-old rescue who is a regular on the California surfing scene.

Incredible photos show Sugar hanging ten at Huntington Beach, California, a skill that she picked up not long after being rescued by her surfer owner Ryan Rustan, 39, in January 2011.

Other images show Sugar riding with her doggy pals, Kiwi and Titi, while also jumping onto a board with Mr Rustan.