In a year that disrupted or derailed the economic fortunes of almost every sector of Australian society, data has consistently shown one group worst hit in many indicators: women.

As analysts and advocates continue to express concern over the lack of measures to boost access to childcare and jobs for women – especially those over 35 – in Tuesday's federal budget, new research supports their claim that Australian women are feeling the "compounding" economic, physical and emotional tolls of the pandemic. 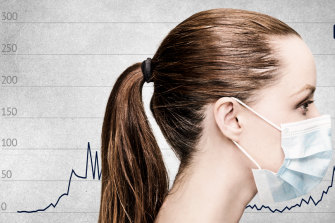 Women have shouldered the burden of frontline care in the pandemic but some economic observers say they were left out of the budget.Credit:The Age

The national report, The Worsening of Australian Women’s Experiences under COVID-19, shows women are more anxious about keeping their jobs and funding their retirement and are carrying a heavier load at home even if they are still working. They are consequently suffering worse mental and physical health.

The study, out next week, shows women are "bearing the physical load, the economic load and the emotional load; they get the triple whammy – and the data bears that out", according to Dr Andrea Carson, a Melbourne University political scientist who with Associate Professor Leah Ruppanner and Dr Shaun Ratcliff of the University of Sydney compared the results of a survey in September with one they conducted in May.

"We've had lots of studies into various aspects of this, now we are able to see it in its entirety," Carson says. "Women are carrying a load that doesn't easily go away and it won't with the male-driven recovery scheme we’ve seen so far. It will exacerbate.

"There's a mental, economic and physical health crisis waiting around the corner if it's not addressed. The budget overlooked many women when they needed it most."

As the budget received criticism for focusing too heavily on creating jobs in male-dominated industries and failing to assist in areas such as caring, education and the arts, senior Morrison government ministers defended it. Social Services Minister Anne Ruston said “every single measure in the budget is available for women".

Employment Minister Michaelia Cash said women would benefit from many of the headline items, for example, "as a woman, if you're in the workforce you pay tax, you get a tax break". "If you drive on roads as a woman, we do, you will benefit from our investment in infrastructure," she said.

But the new research suggests women are not convinced of their financial security.

"It is harming women's economic prospects, their wellbeing – with mental health concerns through anxiety about their economic prospects – and increasing their share of work they do at home while trying to work from home if they still have employment," Carson said.

Nationally, 33 per cent women (compared with 28 per cent of men) were worried they do not have the right skills for the future of work.

Economists say they can understand why working women, particularly those over 35 and those struggling to afford quality childcare, are anxious.

'Women are carrying a load that doesn't easily go away and won't with the male-driven recovery scheme . . . It will exacerbate.'

"It's not good enough; they haven't analysed how this recession is different from past recessions; they've come at it with the old male toolkit rather than a toolkit needed for this recession. And that hurts women," she says.

"Ultimately it will hurt the whole recovery, male jobs as well as female jobs. If you just focus on one section of your economy [in this case, construction, infrastructure and manufacturing] and not on sections hurting and needing support, then recovery is going to be much slower." 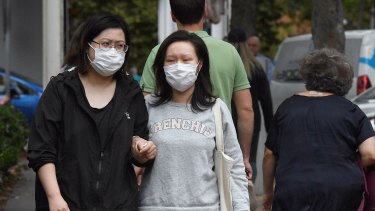 Women are suffering from the compounding effects of economic, physical and mental health burdens during the pandemic, new research finds.Credit:Kate Geraghty

Jackson says the government came close to removing the tax disincentive that effectively means childcare support cuts out at three days a week, but when the rate of women's job losses ceased to outstrip men's, as they had been doing in the early months of the pandemic, the measure was scrapped.

"Economic growth in this country has relied on population growth … without immigration we need another source of growth and female participation could be that source of growth. Childcare is an economic reform, not a social spending program," she says.

Jackson was "flabbergasted" by the omission of childcare or job creation programs in female-dominated industries such as aged care. "I was fuming, and so offended. They've taken a really narrow view of recessions and how you respond to them."

Executive director of think tank Per Capita Emma Dawson agrees it was "shocking" that no new childcare measures appeared, especially in a downturn widely dubbed the "she-cession" or "pink recession" due to data showing its disproportionate impact on women.

"There was very little aimed at women, even though the evidence will show women have been much more badly affected in terms of loss of jobs and hours and detachment from the labour force, and those who have continued to work are doing so on the front line of the pandemic in care roles.

'A lot of women who relied on those retail and hospitality jobs and shifted them around their caring responsibilities will be displaced.'

"The reason people are so incensed is because we felt the pandemic had shone a light on the issue that women do 90 per cent of the childcare and 88 per cent of the aged care, and even on the checkouts they are relied upon so much in a crisis and they have been ignored," she said.

Incentives for employers to hire young people were positive and important but "cutting it off at 35 means a lot of women who relied on those retail and hospitality jobs and shifted them around their caring responsibilities will be displaced by that program".

Women who had lost jobs in accommodation, food and retail businesses early in the pandemic, and who were not eligible for JobKeeper because of the duration of their employment, were pulling children out of childcare and losing contact with the workforce, which would mean "we will see an increase in the proportion of older women on unemployment benefits".

Dawson says women went into the pandemic in a weaker economic position, as shown by the fact the fastest growing group going onto long-term welfare was women over 60, followed by women aged 45 to 49. This had flipped since 2001, when the largest group on welfare was men aged 25 to 29.

"There has been a complete shift in the structure of unemployment but we're still treating it as if it was 2001. It has completely inverted and I don't think the government gets it," Dawson said.

"There is so much gender discrimination and bias in our system but they really don't see the structural inequalities or regard women's participation as a problem, other than recognising occasionally that it would increase the GDP."

Corporate women's groups are also disappointed by the lack of action on childcare and the implication for women's long-term financial security. Sue Morphet, president of Chief Executive Women, had been pushing hard for a fourth day per week of childcare to be subsidised and is disappointed it was left out. 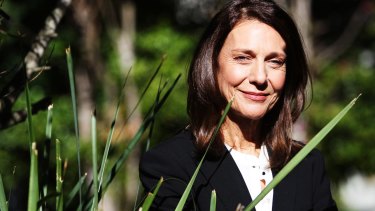 Chief Executive Women’s president, Sue Morphet, says the corporate women’s group will take its campaign for childcare reforms ‘up a gear’ after it was overlooked in this week’s budget.Credit:Peter Braig

"There's been support for business and 40 per cent of small businesses are run by women so that's good, but for those women to employ more women, childcare was an absolute oversight on the government's behalf.

"All aspects of government were aware childcare is a massive enabler, almost an infrastructure, that allows women to return to work and contribute their best to our national economy and productivity."

Morphet says the government must return to applying a gender lens to budgets, which had been the case until the Abbott government scrapped it.

"It's vital: if you don't look at it through a gender lens you're not going to see the disproportionate bias positively towards men and negatively towards women," she said.

Many women could not afford to work more than part-time hours because of the childcare costs of taking on fourth or fifth days, which also meant they had less discretionary spending power, as well as less superannuation.

Older women, in this case women over 35, had "not been given the stimulus they deserve".

"Single women over 55 are the highest-growing demographic of homeless people in Australia, we have to fix that at the cause: they're not earning their money through the second half of their professional lives."

"They're not building the financial security men are building so why weren't they given more help in this budget is the question to be asked. I genuinely believe childcare is still treated as welfare."

Morphet says chief executive women would "take it up a gear" in the campaign for greater childcare support in the May budget.

Professor Rae Cooper of the University of Sydney Business School agrees that the pandemic had highlighted pre-existing gender inequities and the greater financial vulnerability of Australian women.

'All the data suggested women stepped into COVID behind Australian men, and what's happened is an extreme exacerbation of the differences.'

"All the data suggested women stepped into COVID behind Australian men, and what's happened is an extreme exacerbation of the differences men and women face in paid work and the labour market, and in terms of what happens at home," Cooper says.

A way to improve the lot of women across age groups in the May 2021 budget would be "a forensic focus on care, including childcare … all the evidence from organisations like the OECD, the World Economic Forum and the ILO [International Labour Organisation] says we need a gendered focus on experiences and outcomes in the labour market.

"[Saying things like] 'women found businesses, women can get an apprenticeship, women drive on roads' doesn't cut it. There are so many constraints around women's employment in the labour market and they [governments] need to give special attention to this," she says.

"This is not a 'do-gooder' strategy, it reaps enormous economic benefits, not because we're being nice to women, it's well established it will drive labour force participation of women and therefore will improve productivity and massively fuel economic growth.

"That is seriously lacking in this budget."