‘No one will be safe in Biden’s America’: Trump says ‘every city will be under siege’ if Joe and Kamala win and tells cops to ‘fight back’ against the Democrats as New York’s biggest police union endorses him

A visibly-moved Donald Trump was presented with a statue by the City of New York Police Benevolent Association on Friday, after he told the cheering officers that he would restore their ‘dignity’ and fight the Democrats’ ‘left-wing war on cops’.

Trump accused Joe Biden and his running mate Kamala Harris of having ‘a pro-crime agenda,’ and said if they win ‘every city in America will be under siege.’

He added: ‘No one will be safe in Biden’s America.’

Around 100 officers were at the president’s Bedminster golf club in New Jersey, and Patrick Lynch, the firebrand president of the Police Benevolent Association, praised Trump for showing up, despite his brother Robert being taken to hospital in Manhattan.

‘That’s where he puts you – New York police officers, and family,’ Lynch said, handing over the statue of a police officer with one hand on the shoulder of a child and the other holding the flag. 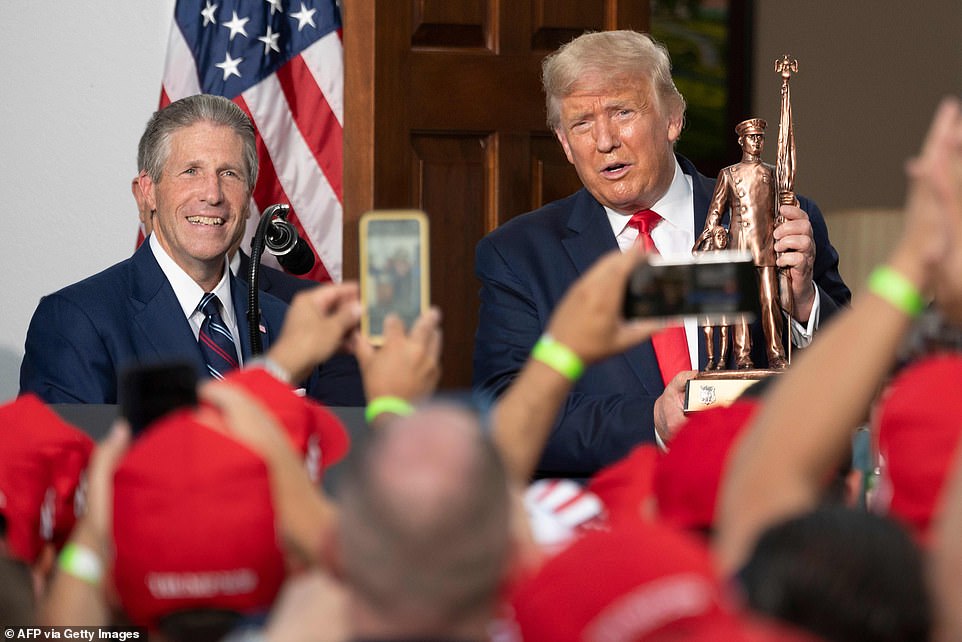 Donald Trump, standing next to union chief Patrick Lynch, shows off the statue he was presented with on Friday evening 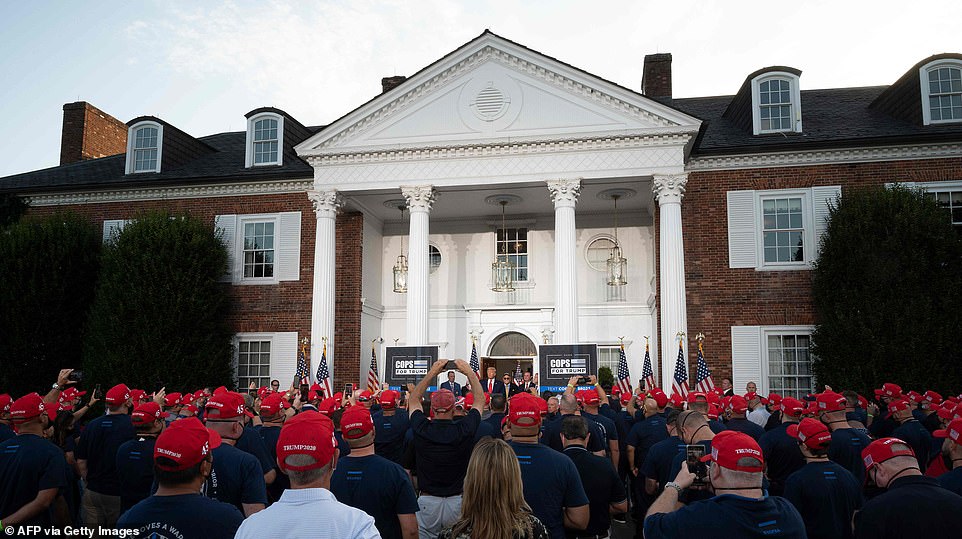 Around 100 officers traveled to Trump’s Bedminster golf course for the event on Friday, standing outside in the warm evening

Lynch said few of the statues are given out, and said he hoped it was destined for the Oval Office.

Trump had told the whooping crowd at the ‘Cops for Trump’ event that ‘one of the saddest things I’ve ever seen’ was during the George Floyd protests in New York City, ‘when they were dumping water on the heads of two of your fellow officers.’

He said that the mayor of New York, Bill de Blasio, has ‘launched a real crusade against the police.’

‘We have great police, and they have to be able to do their jobs.’ 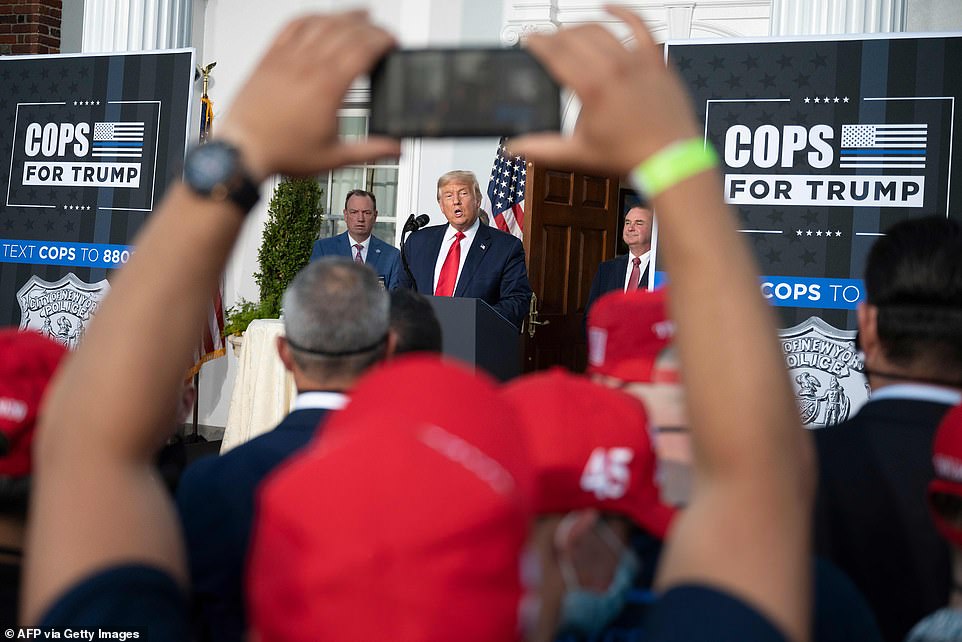 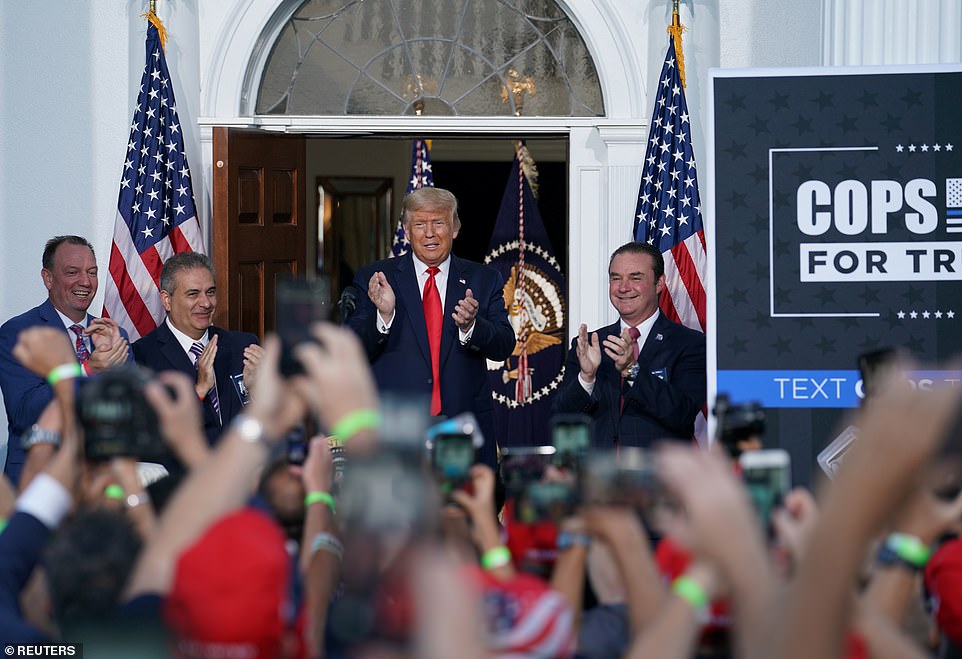 To cheers and whoops from the crowd of officers, he said: ‘We have great police, they have to be able to do their jobs’

The president repeated his dismissal of concerns about police brutality, describing the officers who used excessive force as ‘bad apples’.

‘You’re going to have a bad apple – but that doesn’t mean we’re going to close up our police departments, tell them to run, to leave,’ he said.

‘We’re going to give you back your stature, your statute, and your right to be New York’s Finest – the greatest of all time.

‘We’re going to give you a real shot, because I know exactly – you need money, you need leadership.

‘You need dignity. And this guy, he’s taken your dignity away.’

Trump mused about a new nickname for Biden, asking the crowd: ‘What’s better, Slow Joe or Sleepy Joe? I go back and forth.’

Rudy Giuliani, Trump’s lawyer and mayor of New York from 1994 to 2001, said that during his tenure as mayor he reduced crime by hiring more officers. 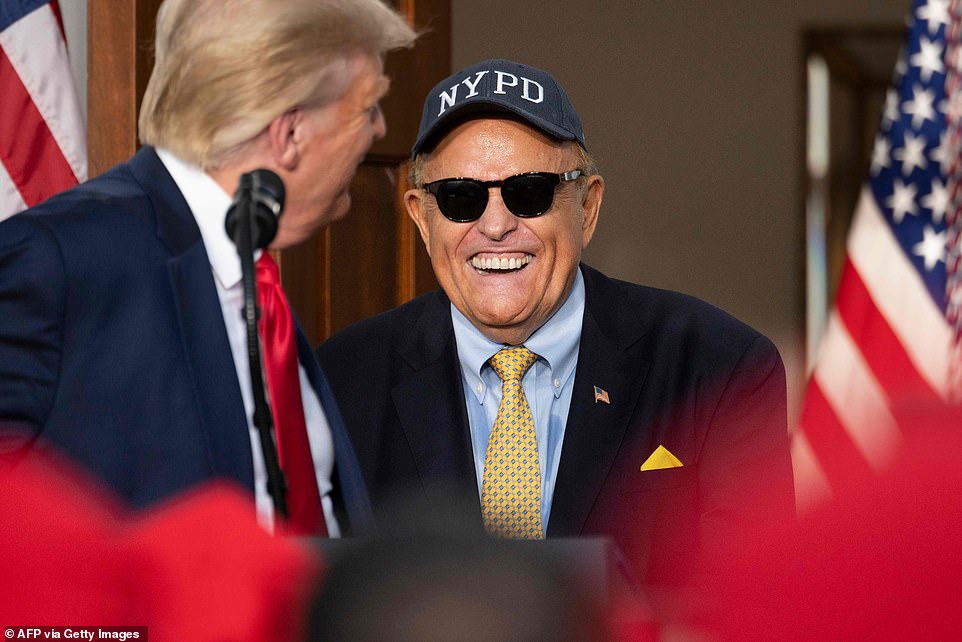 Rudy Giuliani, in an NYPD hat, said those who wanted to reduce police numbers were ‘out of your effing minds’ 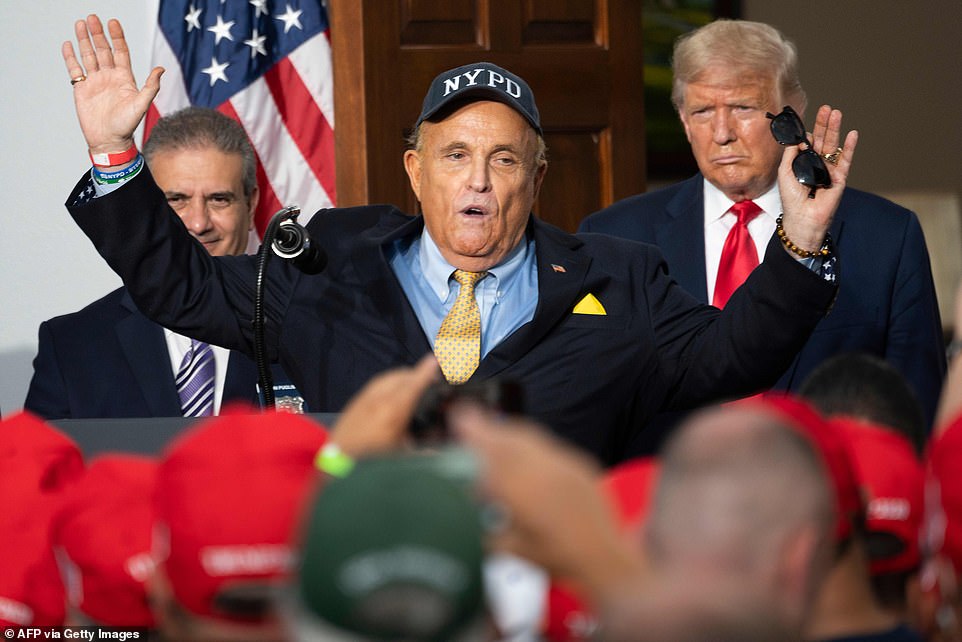 Giuliani, mayor of New York from 1994 to 2001, relished the applause from the officers at the New Jersey venue

‘You hear people say you don’t need police to reduce crime. Out of their effing minds,’ he said.

‘I have people of all races – black, white, Hispanic – come up to them and say they want more police. They say please, please, we love the police.’

He said the officers were ‘in the way of them creating a socialist government’.

He said the Democrats and their supporters ‘hate America’, adding: ‘That’s why they kneel during the national anthem.’

‘They want to convince enough people we’re a hateful country,’ he said.

Lynch, concluding, thanked the president for his public backing of police.

‘You are constantly, always, loud about your support for New York police officers,’ he said, and warned about the rise in crime in the city. 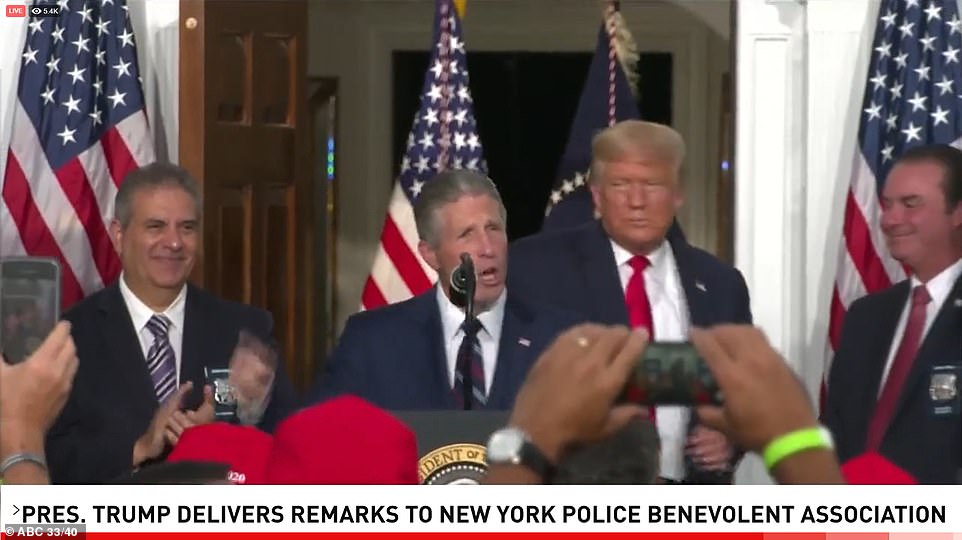 Patrick Lynch, president of the police union, said the officers knew Trump was on their side

‘The city you helped build is sliding back,’ he said.

‘Our city is sliding back because the mantra in City Hall, in the officers, and the man who wants to become president is that the New York City Police Department is evil.

‘The most compassionate people on the face of the earth are the New York Police Department.’

Earlier on Friday Trump vowed to ‘bring back our beloved New York City’ if he wins the election, after New York was ranked as having the worst economic outlook in the US and as crime and homelessness continue to rise.

‘I am going to bring our beloved New York back!’

He linked to a New York Post story about the Rich States, Poor States rankings, which put NY state 50th in the list of economic rankings across the country.

Trump’s promise comes as crime in the city continues to rise, residents flee – abandoning their apartments in larger numbers than ever before – and homelessness continues to spread across the streets.

On Thursday, it emerged that there are 13,000 empty apartments being advertised across New York City – a 14 year record and more than double the number that were being advertised last July. 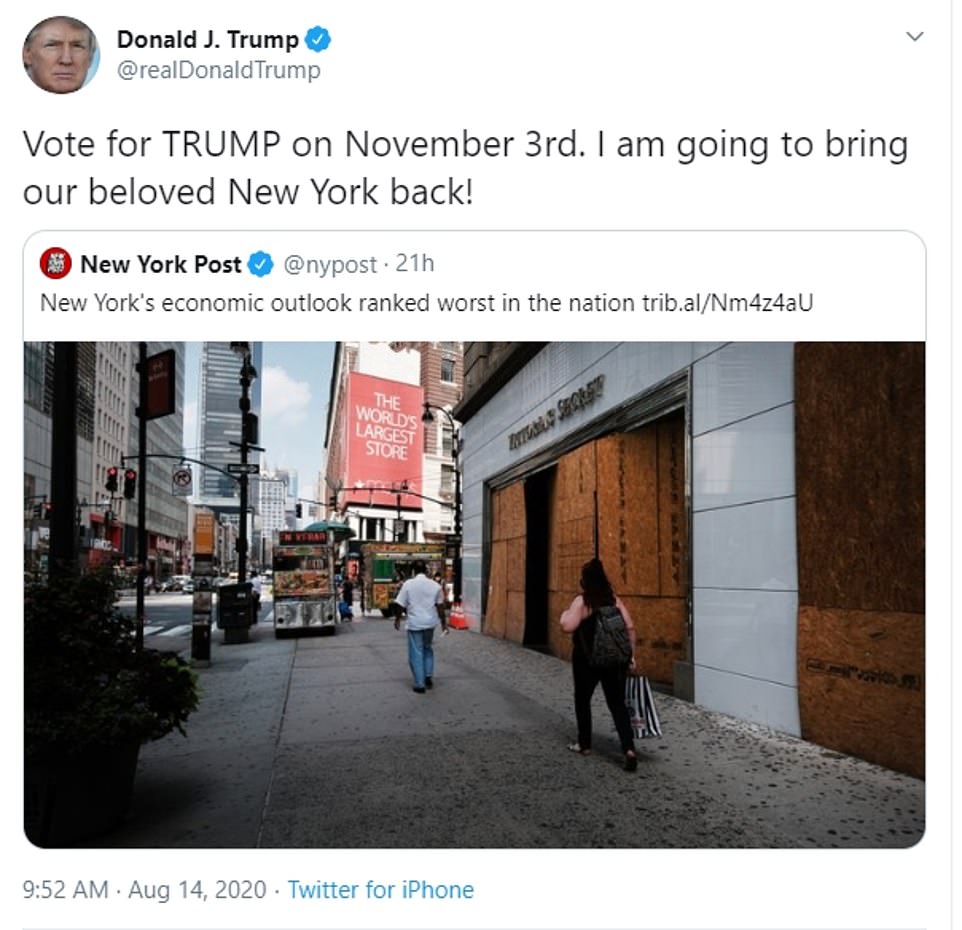 Homeless encampments are popping up all over the city and thousands have been moved from shelters and into luxury hotels, creating small bursts of crime in some neighborhoods.

De Blasio has, however, waved off wealthy residents whose tax dollars make up more than half of the state’s total tax income, calling them ‘fair weather friends’ who can be replaced.

He is in his final term as mayor and cannot be re-elected next November.