Turkish President Recep Tayyip Erdogan has pledged to rid the Sea of Marmara of the scourge of marine mucilage, as workers embarked on a massive effort to vacuum up the foul-looking substance that has been plaguing coastal communities for weeks.

Thick layers of the viscous, slimy mucus colloquially known as “sea snot” have been wreaking havoc along the country’s coastline, washing up on beaches, choking harbours and clogging up fishermen’s nets while suffocating marine life. Scientists say that untreated sewage, agricultural run-off and other forms of pollution are responsible for the phenomenon, but that warming water temperatures caused by climate change appear to be making it even worse. 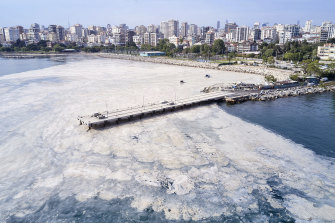 A huge mass of marine mucilage at the Bostanci shore on the Asian side of Istanbul, Turkey, on Monday.Credit:AP

The unappetising muck has become a source of national embarrassment and rising anger. On Tuesday (Wednesday AEST), Erdogan vowed to designate the Sea of Marmara, which is between the Black and Aegean Seas, as a conservation area.

Meanwhile, government officials launched a massive clean-up operation, using tanker trucks with suction hoses that park along the shoreline and effectively act as giant vacuum cleaners. Similar methods have been used to remove toxic blue-green algae from waterways in Florida.

“My fear is, if this expands to [the] Black Sea […] the trouble will be enormous. We need to take this step without delay,” Erdogan said, according to the BBC. 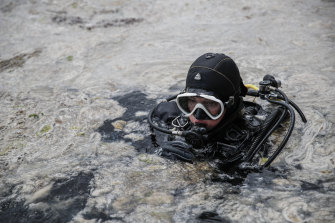 A diver surveys the sea as experts work to clear a mass of “sea snot” off Istanbul.Credit:AP

Environment Minister Murat Kurum said hundreds of workers would be deployed to every province that borders the Sea of Marmara in the largest marine clean-up effort the country has ever seen. To prevent the problem from reoccurring, officials would take steps to reduce pollution and improve wastewater treatment, he said.

While some scientists applauded the plan, others said the Turkish government should have cracked down on pollution decades ago. The number of people living in Istanbul and other cities along the Sea of Marmara has exploded, marine biologist Mert Gokalp told Turkish newspaper Cumhuriyet. “Why did we go on with our lives without thinking about where our wastes go?” 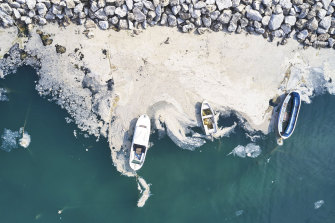 A massive clean-up has started to remove the thick, slimy substance from Turkey’s Marmara Sea.Credit:AP

Marine scientists have also warned that merely removing the top layer of “sea snot” will not solve the problem, because thick bands of mucus are floating below the water’s surface and settling on the sea floor where they pose a hazard to coral and other marine life. It is not clear how the underwater mucus could be removed, but officials in Istanbul suggested last month that it might be necessary to bring in dredging boats.

The mucus is secreted by phytoplankton populations that grow in out-of-control numbers when high levels of nitrogen and phosphorous upset the ocean’s ecological balance. Though the mucus itself is not necessarily dangerous, it can carry toxic microorganisms and dangerous bacteria such as E. coli, and authorities have warned against touching it.

Mucus removed from the Sea of Marmara will be trucked to waste disposal facilities, officials said, though some communities are experimenting with drying it out on land to see whether it can be used as a fertiliser or animal feed.