UK to dispatch a further 1,000 ventilators to India to help struggling healthcare system deal with surge of Covid-19 infections totalling more than 300,000 a day

Britain is rushing to dispatch a further 1,000 ventilators to India to help its struggling healthcare system deal with a surge in coronavirus infections which is killing thousands every day.

Boris Johnson promised ‘the UK will always be there for India’ as he committed fresh assistance including advice from NHS staff and Professor Chris Whitty and Sir Patrick Vallance.

The country has reported more than 300,000 daily cases for more than 10 days straight, leaving hospitals, morgues and crematoriums overwhelmed. 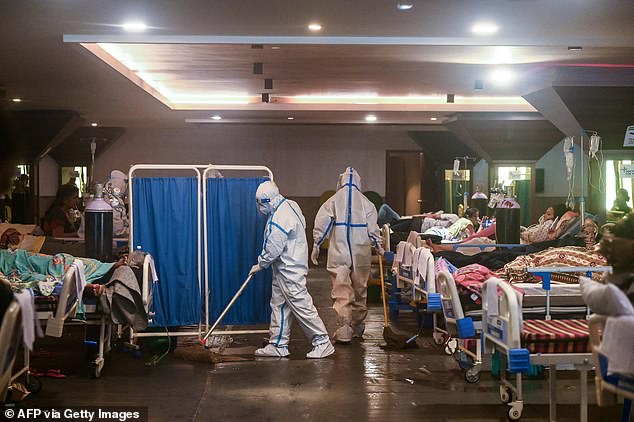 Britain will dispatch a further 1,000 ventilators to India to help its struggling healthcare system deal with a surge in coronavirus infections which sees more than 300,000 infected and thousands die every day (pictured: A banquet hall temporarily converted into a Covid-19 coronavirus ward in New Delhi)

The Prime Minister made the pledge ahead of a call with his Indian counterpart Narendra Modi on Tuesday, arranged to replace a visit to New Delhi which was cancelled as cases spiralled.

The 1,000 ventilators from the UK’s surplus supply are in addition to 200 sent last week, in shipments that have included nearly 500 oxygen concentrators.

The British government had previously agreed to send 600 medical devices, including ventilators and oxygen concentrators.

Prof Whitty, England’s chief medical officer, and Sir Patrick, the chief scientific adviser, have spoken to their Indian counterparts to share the expertise they have gained during the UK’s battle with the disease.

In a statement, Mr Johnson said: ‘The terrible images we have seen in India in recent weeks are all the more powerful because of the close and enduring connection between the people of the UK and India.

‘I am deeply moved by the surge of support the British people have provided to the people of India and am pleased the UK Government has been able to play our part in providing life-saving assistance.

‘The UK will always be there for India in its time of need.’

NHS England is establishing a clinical advisory group to support India’s response by sharing knowledge on how to manage outbreaks.

Earlier in the day, Foreign Secretary Dominic Raab said the UK would ‘look very carefully’ at any request for vaccines from India.

The Cabinet minister will meet his Indian counterpart Subrahmanyam Jaishankar on Monday as he hosts face-to-face meetings with G7 foreign ministers.

Other nations, including the United States, Germany and Pakistan, are also providing support.

India is in dire need of vaccines despite it being the world’s largest manufacturer of jabs.

Mr Raab said the Government has not had a request for vaccines from New Delhi as he was questioned over plans as Britain vaccinates younger and healthier people.

‘We’ll always look very carefully at any requests we’ve got,’ he told The Andrew Marr Show. 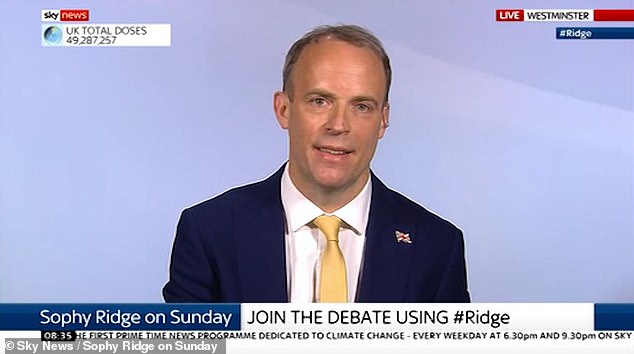 Foreign Secretary Dominic Raab said earlier today that the UK would ‘look very carefully’ at any request for vaccines from India, adding in a statement that the ventilators ‘will help urgently meet some of India’s acute needs’

He said he was not going to ‘speculate on hypothetical scenarios’ when pressed if ministers would grant India access to UK supplies.

Mr Raab said: ‘The Indian relationship is very important to us and we’d obviously want to co-operate very closely together.

‘You know, right throughout this crisis we have said we need to keep supply chains, particularly supply chains, open and we ought to resolve these kind of issues through collaboration, and that is certainly what we’re doing with the Indians.’

In a statement, the Foreign Secretary said: ‘This support will help urgently meet some of India’s acute needs, particularly oxygen for patients.

‘We are determined to help our Indian friends in their hour of need.’

His Labour shadow Lisa Nandy said Britain should aim to send jabs to India ‘as soon as possible’ but that the UK programme should not be paused to do so. 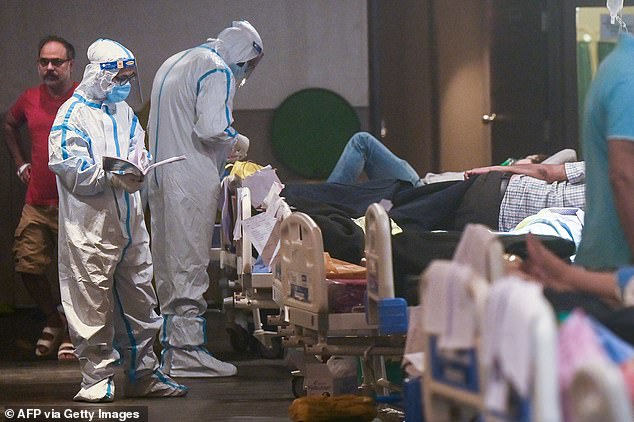 India has recorded more than 390,000 new infections and 3,600 deaths over the past 24-hour period, and has had more than 300,000 cases a day for more than 10 days straight, leaving hospitals, morgues and crematoriums overwhelmed

‘We haven’t defeated this virus in Britain yet and we need to keep up the momentum with that vaccination programme,’ she told Marr on the BBC.

‘This is a question that is really personal to me. I just found out last night that a close family member in India is in hospital with Covid and I’ve got family members here in the UK who are deeply affected by Covid as well.’

A UK order of five million AstraZeneca doses has been stalled in India over a need for retesting and there have been questions over whether the Government may allow them to be used there.

Professor Peter Openshaw, a scientist who advises the Government, said it would be a ‘very reasonable arrangement’ to allow India to keep those jabs.

But he added: ‘It’s a matter of balancing what we have available to our own population and what we can distribute equitably around the world through these well-organised systems that are in place.’

Modi’s government is reluctant to impose a national lockdown, but nearly 10 Indian states and union territories have imposed some form of restrictions. 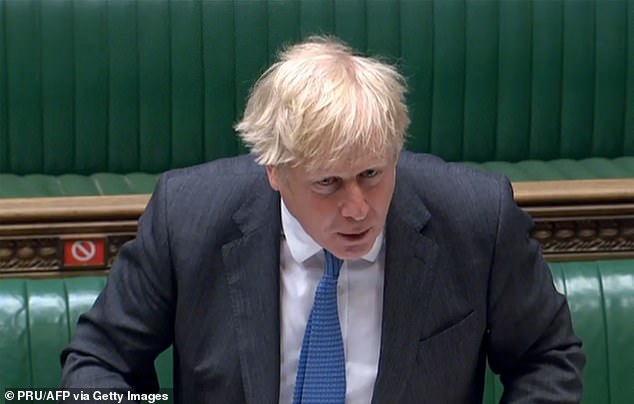