Zurich: United Nations Secretary-General Antonio Guterres has called on the global community to contribute $US35 billion ($48.2 billion) for the World Health Organisation's (WHO) coronavirus vaccines, treatments and diagnostics program.

Some $US3 billion has been contributed so far, but Guterres told an online event on Thursday that these initial contributions were "seed funding" – and less than 10 per cent of what WHO needs for the program, formally called Access to COVID-19 Tools (ACT) Accelerator. He said $US15 billion was required in the next three months. 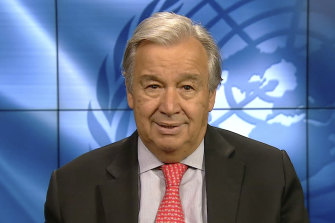 Financial support has, so far, lagged well short of WHO's goals, as governments and trade blocs including Australia, the UK, Japan, the United States and the European Union, pursue their own bilateral vaccine deals.

"We now need $US35 billion more to go from 'start up' to 'scale up and impact'," Guterres said at a meeting of a council formed to help the ACT Accelerator gain traction. "There is real urgency in these numbers. Without an infusion of $US15 billion over the next three months, beginning immediately, we will lose the window of opportunity." 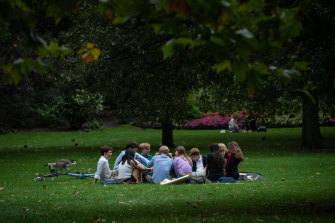 Anybody arriving in England from Portugal, excluding the Azores and Madeira, after 4am on Saturday will need to self-isolate for 14 days, he said. Portugal joins France and Spain as the third big European tourist destination on the no-go list.

Hungary, French Polynesia and Reunion have also been removed from England's list of 'safe' countries, Shapps said, while Sweden has been added.

Also on Thursday, Scotland joined England in limiting social gatherings to six people after a recent spike in cases.

First Minister Nicola Sturgeon told Scottish lawmakers the new regulations would start on Monday – in line with changes south of the border – and apply to gatherings in and out of the home.

Scotland’s restriction is perhaps more onerous as it applies to a maximum of two households. In England, six individuals from six different households can meet.

Sturgeon says there will be some limited exceptions, including sports and places of worship. Children under 12 will not count towards the limit.

The UK’s four nations – England, Scotland, Wales and Northern Ireland – moved into lockdown together in March, but have since gone their own ways on a range of virus-related policies.

France reported 9843 new cases in 24 hours on Thursday, up from 8577 one day earlier. It was the highest daily total since the start of the pandemic.

Intensive care (ICU) numbers rose for the 14th straight day, with the number of people in ICU above 600 for the first time since June 30.

President Emmanuel Macron is on Friday expected to propose new recommendations to contain the spread.

Greece reported 372 new cases of COVID-19 on Thursday, its highest daily tally since the start of the coronavirus outbreak.

Of the new cases, 114 were due to an outbreak at a food processing plant in northern Greece, with 133 recorded in the greater Athens area, health authorities said.

The increase in infections in recent weeks has prompted Greek authorities to gradually introduce more restrictions during the peak of the tourism season.

Greece has also found at least 35 cases of coronavirus in the overcrowded migrant camp of Moria on the island of Lesbos which burned down on Wednesday, leaving thousands of migrants homeless.

The latest COVID-19 data out of Scandinavia has raised new questions about how best to fight a second wave of the virus.

In Sweden, which still has the highest COVID-19 death toll in the region, the number of new cases has fallen to about 200 a day, on average. In Denmark, which was among the first in Europe to shut its economy and close its borders, has reported a daily increase of 317 cases – the most since early April.

Sweden's state epidemiologist, Anders Tegnell, has long argued that COVID-19 can't be fought with lockdowns. He says the virus could be around for years, which requires long-term adjustments in behaviour to make social distancing second nature.

Tegnell suggested on Thursday that more Swedes have developed immunity to the virus, which "makes it harder to start transmission than in some other countries, where fewer people have been ill."

But Sweden still stands out in the region as the country to have suffered the highest number of fatalities – by far. Per 100,000, Sweden's COVID-19 death rate is now about 57, compared to 11 in Denmark and 5 in Norway.

Norway, which imposed a lockdown in March, has also seen a recent increase in new cases and Prime Minister Erna Solberg warned that new measures may be needed.

"It's time to find that inner self-discipline again," Solberg said on Thursday.

The United States will end coronavirus screening for most airline passengers, saying the procedures have had limited effectiveness, according to the Centres for Disease Control and Prevention (CDC). 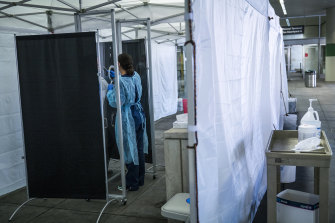 Testing will be phased out for arrivals at US airports.Credit:Bloomberg

Travellers arriving from China, Iran, most of Europe and Brazil will also no longer be required to arrive at 15 designated airports when the new policy goes into effect Monday.

"We now have a better understanding of COVID-19 transmission that indicates symptom-based screening has limited effectiveness because people with COVID-19 may have no symptoms or fever at the time of screening, or only mild symptoms," the agency said in a statement.

"Transmission of the virus may occur from passengers who have no symptoms or who have not yet developed symptoms of infection."

Instead, the US government's efforts will focus on educating travellers before they leave and while they're in the air, and on gathering passengers' contact information so they can be reached for contact tracing.

The new policy does not change travel bans on non-US residents that apply to the foreign countries.

Air travel played a critical role in rapidly spreading the virus from China around the world, but experts say restrictions on travel imposed once the virus had already spread widely did little to further contain it.

While the changes to screening might do little to immediately spur demand for international travel, the shift has the support of the airline industry.

Domestic air travel has seen a partial rebound after declines in passenger numbers of 95 per cent in the northern spring, but international passenger volumes have not returned. The US Bureau of Transportation Statistics said this week that there were just 1.1 million travellers on international flights in July, a decline of 90 per cent from the same month last year.