The not so rock ‘n’ roll Stones’ starter homes: Unseen photographs show what Mick Jagger, Keith Richards and co really craved when they hit the big time was middle-class domesticity

Believe it or not, these pleasant-looking young men with their well-barbered hair and smart Mod clothes were once branded ‘ugly’, ‘dirty’ and a menace to decent society.

They are The Rolling Stones posing for their personal photographer Gered Mankowitz in 1966 when they were a rock band such as the adult world had never seen — and wished it still hadn’t. 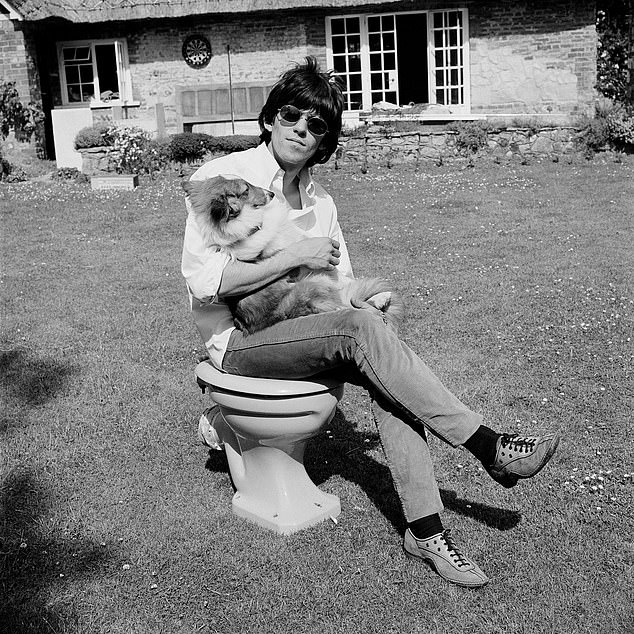 After fan mags demanded pictures of The Rolling Stones in domesticity, they asked their friend Gered Mankowitz to do ‘At Home’ sessions. Pictured, Keith Richards sat on a loo in his garden 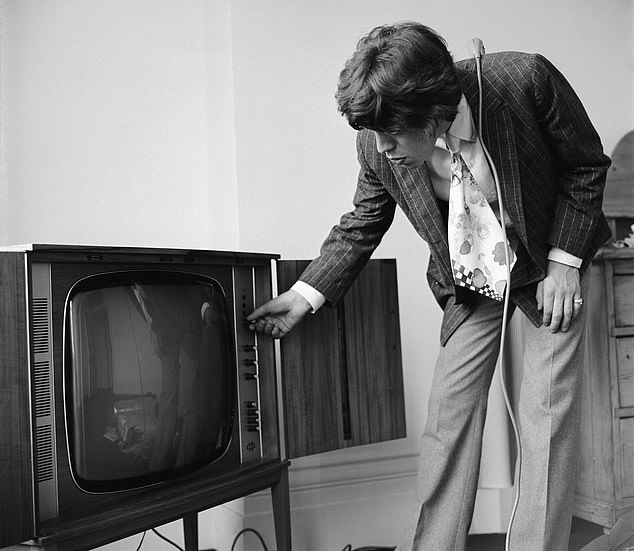 Socially ambitious Mick Jagger had been living in a Baker Street flat with his then-girlfriend, but purchased Harley House, a prestigious Edwardian mansion block in Marylebone, London

Their hair was a national scandal, covering their ears, curling over their shirt collars and widely believed to harbour vermin — though it was always fastidiously shampooed, sometimes twice a day.

But what most disgusted and terrified British parents was the raw, sullen sex projected by the young Mick Jagger in songs such as Get Off Of My Cloud, 19th Nervous Breakdown and, above all, (I Can’t Get No) Satisfaction, which seemed nothing less than a hymn to self-abuse.

It was all hype, concocted by their brilliant manager Andrew Loog Oldham and wished on what had been a rather earnest blues band.

Oldham saw that to some music fans The Beatles were becoming too tuneful and parent-friendly, so he invented the first anti-heroes of pop.

As struggling blues musicians, the principal Stones — Jagger, Keith Richards and Brian Jones — had lived communally, often in squalor. But by 1966, with several top-ten hits behind them, each could afford a decent ‘pad’ of his own.

The fan mags demanded pictures of them in their new domesticity and, rather than let in intrusive Press photographers, they asked their friend Mankowitz to do an ‘At Home’ session with each of them. He had been on the Stones’ 1965 U.S. tour and provided images for several of their album covers. 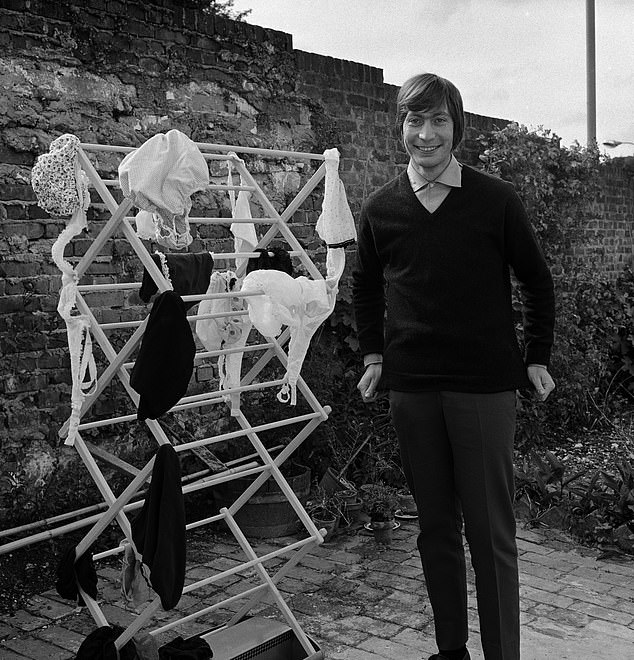 The surprise portrait was Watts in his back garden in Lewes, East Sussex, wearing a nondescript pullover and standing next to a clothes horse airing lingerie

Mankowitz’s lens caught him in unusually vulnerable mode, standing in his lofty front hall and rather cluelessly twiddling the knobs of his enormous new TV set.

Richards — in those days virtually silent other than on his guitar — had shown an unexpectedly rural bent, purchasing an olde worlde cottage named Redlands, near West Wittering, Sussex.

Mankowitz snapped him in his garden, jokily seated on a disconnected toilet, enjoying a seclusion which, alas, was not to last.

A year later, a task force of police invaded Redlands and busted Richards and Jagger on minuscule drugs charges.

When photographed by Mankowitz, the blond, angelic-looking Jones was a dominant presence in the band as its founder and name-giver, and a brilliant musician who could pick up any instrument and instantly master it. 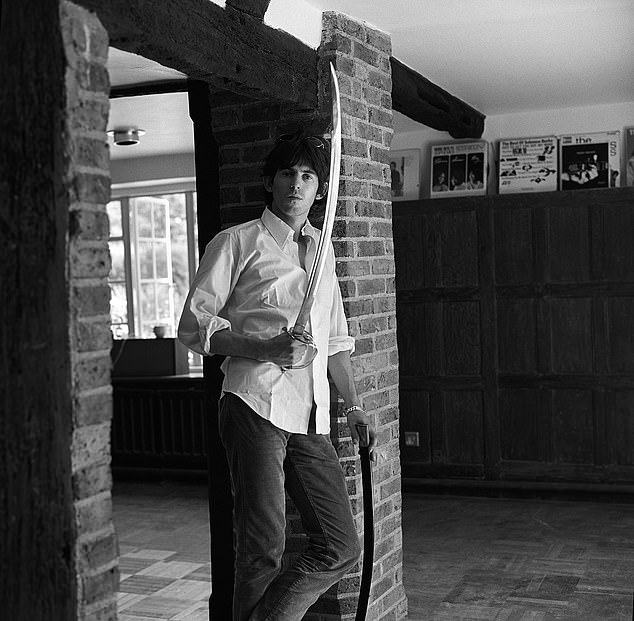 Richards, in those days virtually silent other than on his guitar, had shown an unexpectedly rural bent, purchasing an olde worlde cottage named Redlands, near West Wittering, Sussex

He was the only one to live up to the band’s image. His drinking, drug-taking and womanising left even Mick at the starting gate.

However, the balance of power changed when Oldham coerced Jagger and Richards into writing songs together; a far more lucrative proposition than the Stones’ previous r&b cover versions.

For all his instrumental brilliance, Jones had no talent as a writer, so was instantly downgraded. Mankowitz — to whom he clung as one of his few real friends — snapped him at the flat just off Fulham Road where he lived with the stunning German/Italian model Anita Pallenberg.

Sexually ambivalent, he liked Anita to dress him in her clothes and make him up. She may have lent him the jewelled headband reminiscent of an Arabian Nights princess he chose for the session.

Still worse things lay ahead for lead guitarist Jones. A year later, he lost Anita to Keith, sank into drug addiction and paranoia, shrank to a nonentity in the Stones and mysteriously drowned in his swimming pool in 1969.

Bass player Bill Wyman and drummer Charlie Watts were older than the other three, and both married, so Mankowitz had to make do with the ordinary suburban homes where they had lived for years. Wyman posed in his kitchen in Penge, South-East London, with the family dog. 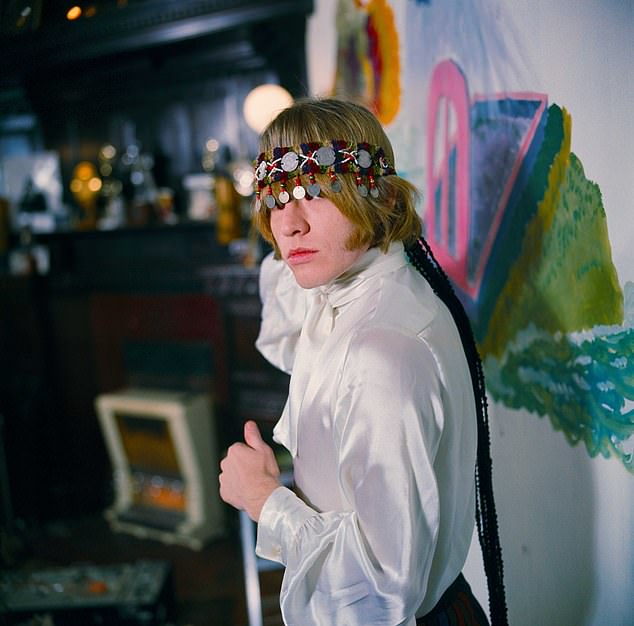 The blond, angelic-looking Brian Jones was a dominant presence in the band as its founder and name-giver, and a brilliant musician who could master any instrument

The surprise portrait was Watts in his back garden, wearing a nondescript pullover and standing next to a clothes horse airing lingerie.

The stony-faced drummer was normally so well groomed that even the one time when he hit Jagger, for the singer’s overbearing arrogance, he dressed up for it in a suit, with plenty of aftershave.

As it turned out, there never was any call for Mankowitz’s portfolio of the young Stones at home, and it stayed in a plastic bag under his desk for many years as he went on to photograph the likes of Jimi Hendrix, Elton John, Kate Bush and Duran Duran.

It is a testament to the capriciousness of the music business.

For who could ever have imagined that the most unstable of Sixties bands would still be going strong 54 years later, with Mick Jagger and Keith Richards still performing as septuagenarians and national treasures, and yet somehow still seeming cool?