Washington: The US has imposed sanctions on two Lebanon-based companies and a man described as an official with the Lebanese militant group and political party Hezbollah, which it considers an Iran-backed terrorist organisation.

The new restrictions come as a senior US State Department official accused Hezbollah operatives of moving ammonium nitrate from Belgium to France, Greece, Italy, Spain and Switzerland for terrorism purposes. 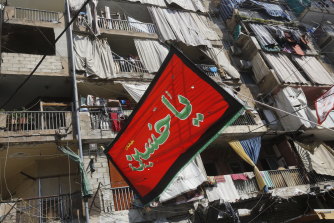 Ashura celebrations in Beirut last month. In Lebanon, Ashura is an occasion for supporters of Hezbollah movement to proclaim their loyalty to their leader, Hassan Nasrallah.Credit:Getty Images

Ammonium nitrate is a chemical compound commonly used as a fertiliser, but it can be used to make explosives. It can also be dangerous in storage, as demonstrated by the huge explosion last month in the Lebanese capital of Beirut.

Nathan Sales, the State Department coordinator for counter-terrorism, said without offering evidence that the US believed Hezbollah has since 2012 transported the chemical around Europe in first aid kits with cold packs that contain the compound. The US believes these supplies are still in place throughout Europe, possibly in Greece, Italy and Spain.

"Why would Hezbollah stockpile ammonium nitrate on European soil?" he said. "The answer is clear: Hezbollah put these weapons in place so it could conduct major terrorist attacks whenever it or its masters in Tehran deemed necessary."

Sales made the remarks in an online forum hosted by the American Jewish Committee, which has called upon more countries to ban Hezbollah and its operations. He appealed to countries in Europe and elsewhere to impose bans on the organisation. 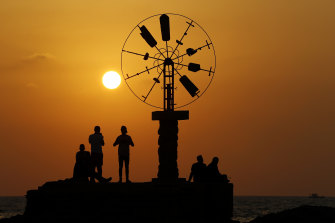 Lebanese citizens stand next to a windmill while watching the sunset, in Tripoli, northern Lebanon, on Thursday.Credit:AP

Lebanon is passing through its worst economic and financial crisis in decades. The country is also facing a political deadlock amid delays in the formation of a new, crisis cabinet, because of a portfolio dispute.

The US Department of the Treasury’s Office of Foreign Assets Control, or OFAC, sanctioned the companies Arch Consulting and Meamar Construction "for being owned, controlled, or directed by Hezbollah". It has imposed sanctions on many of the militant group’s officials in the past.

OFAC also sanctioned Sultan Khalifah Asaad, saying that he is a Hezbollah official closely associated with both companies.

"Hezbollah leverages Arch and Meamar to conceal money transfers to Hezbollah's own accounts, further enriching Hezbollah's leadership and supporters, and depriving the Lebanese people of much-needed funds," the Treasury said.

On Wednesday, a 15-day French-imposed deadline passed without Lebanon forming the new cabinet that would be tasked with resolving the economic crisis and carrying out reforms to pave the way for financial aid from the international community.

Lebanon’s Prime Minister-designate Muatapha Adib told reporters after meeting President Michel Aoun on Thursday afternoon that he would allow more time for discussions over the formation of a new cabinet.

The talks have stalled over which of the country's sects will get the Finance Ministry. Hezbollah and its Shiite ally Amal group of Parliament Speaker Nabih Berri are insisting their sect gets the portfolio and that they get to name Shiite ministers in the new cabinet.

Militant group and Lebanese political party Hezbollah has stored chemicals that can be used to make explosives in several European countries, a senior US State Department official said as he appealed to countries in Europe and elsewhere to impose bans on the organisation.

The US has designated Hezbollah as a foreign terrorist organisation since 1997, but some countries distinguish between the organisation's military wing and the political wing.

The EU lists Iran-backed Hezbollah’s military wing as a banned terrorist group, but not its political wing, which has been part of Lebanese governments in recent years. Some individual countries, including Germany and the UK, have outlawed the group in its entirety. Sales called on more countries to do the same.