A Melbourne man has been arrested and charged with incitement after he allegedly helped to organise an anti-lockdown protest planned for next week.

The protest scheduled to take place in Melbourne's CBD on September 5 has attracted interest from thousands online but North West Metro region Assistant Commissioner Luke Cornelius said police have been monitoring the activity on social media and arrested a man on Friday. 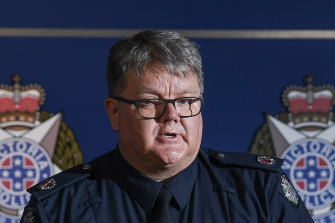 The 76-year-old man from Windsor was charged with inciting others to breach the Chief Health Officer’s directions by attending the protest. He was bailed and will appear before the court next February.

His house was raided and two laptops, a computer and two mobile phones were seized.

Mr Cornelius said those thinking of protesting were “utterly selfish”.

“We will be taking further action over the course of the next week in the lead-up to the protest as we identify other organisers and will be taking action against them,” he said.

“We will be taking action against anyone who turns up on the day to participate.”

Mr Cornelius said inciting someone to breach the Chief Health Officer’s direction attracts the same penalties as someone who actually breaches the directions.

“In this case, because we will be putting this matter before the court, that individual will be facing a penalty of up to $20,000. So it’s a very serious offence,” he said.

He said that conspiracy theorists are using the current stage four lockdown restrictions to spread their "own ridiculous notions". 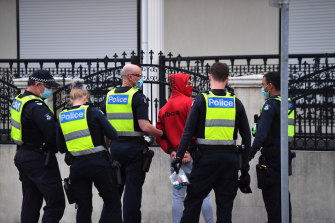 Police detain a man in Dandenong on Thursday afternoon. He was later released.Credit:Joe Armao

"The tinfoil hat wearing brigade are alive and well out there in our community and they are taking every opportunity to leverage the current situation to serve their own ridiculous notions about so-called sovereign citizens, about constitutional issues about how 5G is going to kill your grandkids,” he said.

“It’s just crazy, it’s batshit crazy nonsense. People need to wake up to themselves because the wider community is awake to you and you need to stop it.”

He said anyone attending the protest in the CBD will be arrested.

“Their feet won’t touch the ground,” he said.

He also urged anyone planning on attending daily anti-lockdown protests in Dandenong to think again.

Those who have taken part in recent days have claimed that they aren’t gathering to protest but are coincidentally all out at the same time for their one hour of exercise.

“Please don’t try and dress your behaviour up as exercise,” said Mr Cornelius.

“We all know it’s not, so stop playing us and the wider community for fools. You’re exposing everyone to danger, you’re in breach and you will be fined,” he said.

“Just for one moment, stop thinking about yourselves and spare a thought for the loved ones of the nearly 500 Victorians who have died so far.

“Reflect on what you need to do to stop more death, more grief and more harm.”

Two men were charged and 17 people were fined at the protest in Dandenong on Thursday night.

Local leaders have voiced concern over the repeated protests at the George Andrews Reserve this week.