Waiting more than a YEAR for NHS treatment will become the norm after Covid pandemic, health service bosses warn

Waits of more than a year for NHS treatment will become a staple moving forward due to the damage done by the winter Covid wave, health services bosses warned today.

In a letter to the Prime Minister, the NHS Confederation claimed people should not expect non-Covid care to rebound as quickly as it did last summer following the first peak.

It urged the Government to have ‘an honest conversation’ with the public about the future, warning that patients can expect to be waiting over 12 months for routine operations ‘for some years’.

The letter said it was no longer feasible to commit to its pre-Covid promise of ‘a zero-tolerance approach to patients waiting longer than 52 weeks for their planned treatments’.

One hundred times more people have been on NHS waiting lists for more than a year now compared to this time in 2020, as a result of the health service having to fight two waves of the pandemic.

Latest figures show 192,000 people in England have been waiting 12 months or more for treatment, compared to about 1,600 last January.

NHS hospitals had to wrestle with double the number of Covid patients this winter compared to the first wave, with almost 40,000 sufferers in hospital at the peak in January compared to little over 20,000 last April.

Last spring the NHS was able to shut down the majority of its services and turf out tens of thousands of non-Covid patients to focus solely on incoming carriers of the new disease.

But this time around it has had to juggle record levels of Covid patients while playing catch up on all the delayed care from the spring. 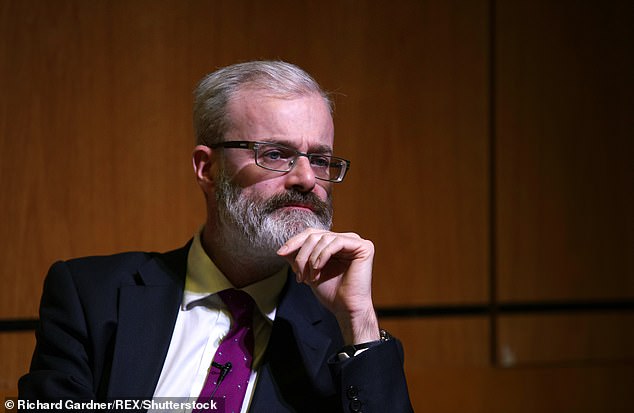 Danny Mortimer, chief executive of the NHS Confederation and the first signatory of the letter, claimed people should not expect non-Covid care to rebound as quickly as it did last summer following the first peak

The NHS had to wrestle with double the number of Covid patients this winter compared to the first wave, with almost 40,000 sufferers in hospital at the peak in January compared to little over 20,000 last April

Operation waiting lists are at an all-time high and cancer treatment is at a record-low as a  result of the savage toll of the coronavirus pandemic on the NHS.

Experts have warned the country faces a future wave of health crises because so many people have had their care delayed.

Some 4.5 million people in England are waiting for non-emergency surgery, the highest figure since records began in 2007.

And a total of 192,000 have been waiting more than a year for life-changing operations such as hip and knee replacements.

This is around a 160-fold increase since before the pandemic began in February, when just 1,163 had been waiting for a year.

The NHS waiting list data goes up only until the end of November – and doctors say the total will keep rising.

NHS England figures also show that at least 12,000 fewer heart operations than expected took place in England in the year to November 2020 – around one third lower than usual.

Separate figures show that during the first wave of the pandemic around 35,000 fewer people were diagnosed with cancer than would be expected.

Experts said the delays will cost lives, allowing tumours to grow and cancers to worsen.

The data from Public Health England’s National Cancer Registration and Analysis Service reveals 106,732 cases were diagnosed between April and September 2020, down from 142,324 the previous year.

At least 27million GP appointments have also been ‘lost’ during the pandemic.

NHS Digital estimates there were 26.7million fewer GP appointments in England between March and August last year, during the first Covid wave, compared n the same period in 2019.

That figure did not take into account the two national lockdowns that came afterwards.

Inspectors fear that ‘lost’ appointments with doctors have led to a significant deterioration in patients’ health and the worsening of other conditions such as asthma and diabetes.

Other harrowing figures show the number of stillbirths in England almost doubled last spring, according to the Healthcare Safety Investigation Branch (HSIB), and at least 250,000 women are overdue their cervical smear tests as a result of the coronavirus pandemic, NHS figures show.

The Royal College of Physicians, said today that ‘unbelievably tired’ NHS staff are in desperate need of a break.

According to surveys by the membership body, more than a quarter of NHS workers have sought mental health support during the pandemic and almost one in ten of those did so formally via their employer or GP.

Official figures show that over three million NHS staff in England have taken sick days due to mental ill health since the start of the pandemic.

Danny Mortimer, chief executive of the NHS Confederation and the first signatory of the letter, said the NHS was grappling a backlog of non-Covid care, as well as delivering the ambitious vaccination programme.

He said he expects the health service will also need to contend with a wave of mental health patients as a result of the toll of three lockdowns and a brutal recession.

And experts expect Covid to become an endemic disease that could add pressure on hospitals every winter.

Mr Mortimer told The Times: ‘Covid is something that the NHS is going to have to respond to permanently now, going forward.

‘We’re likely to need booster vaccinations. That’s capacity we never planned for before.

‘The pandemic has a huge impact on mental health [as does] the horrible recession that we’re entering.

‘Then there is the impact of long Covid… five to 10 per cent of people who contract the virus appear to have substantial longer-term problems. We will feel that in terms of our services.’

The Department of Health and Social Care said: ‘Our NHS is facing unprecedented pressure as it faces down this pandemic.

‘We continue to do everything we can to support the health service and recognise the exceptional efforts being made by health and care staff.’

It comes after an explosive report yesterday claimed the NHS’s performance during the pandemic was ‘nothing special’ and many countries without similar public healthcare have performed better.

The Institute for Economic Affairs said ‘there is no rational basis for the adulation the NHS is currently receiving’ as it attacked ‘confirmation bias’ on both sides of the political spectrum.

It accused politicians across the board of trying to fit the pandemic into their pre-existing world-view.

This included leftwingers who used the deadly pandemic to criticise low public spending but also those on the right who have demanded that the UK become much more self-sufficient.

The paper, written by the IEA’s Dr Kristian Niemietz, pointed out that nations with the fewest Covid deaths and least economic and social disruption, like Taiwan and South Korea, had low public spending in the lead-up to the outbreak of the virus in China and no public health services.

They did, however, take steps to close their borders and introduce massive testing programmes early last year that allowed them to stamp on outbreaks much more successfully than the UK.

‘What is safe to say is that there is no rational basis for the adulation the NHS is currently receiving, and no reason to be ”grateful” for the fact that we have it,’ Dr Niemietz wrote, criticising Boris Johnson among others for praising the health service.

‘There is no guarantee that this would have served the UK better during the pandemic, but there is certainly no reason to believe that it would have done any worse.

‘There is nothing special about the NHS, neither during this pandemic, nor at any other time.’

German Dr Niemietz also attacked the ‘clap for the NHS’ during the first lockdown, saying it was part of a ‘false Covid-19 narrative’ of ‘how lucky we are to have the National Health Service, and how grateful we have to be for that.’