Washington: A new variant of the coronavirus that causes COVID-19 is raising concern around the globe.

South Africa on Thursday confirmed that scientists there had detected a variant with a high number of mutations that could make it more easily transmissible. The World Health Organisation has labelled it a “variant of concern”, a classification given to only four other variants so far – Alpha, Beta, Gamma and Delta. The global health agency also gave it a Greek letter designation: Omicron.

Some countries, including the United States, moved to shut down flights on Friday from southern Africa, while pharmaceutical makers vowed to keep close watch on how well their vaccines hold up against the new variant. 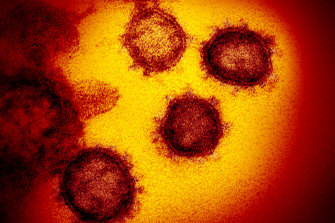 The World Health Organisation has named the latest variant Omicron.Credit:AP

Thus far, there is too little research to draw conclusions, with experts urging caution but not panic.

“This is the most concerning variant we’ve seen since Delta,” Eric Topol, director of the Scripps Research Translational Institute, said in an interview. “It’s going to take a really high bar for something to take over for Delta, and we don’t know whether this is going to do it.”

Here’s what you need to know.

Where has Omicron been confirmed?

Although it is unknown where the variant came from, it was first detected in the southern region of Africa. On Tuesday, scientists in South Africa made data of the variant public. Noticing the distinct sequence, a virologist at Imperial College London, Tom Peacock, raised alarms about the “really awful spike mutation profile”.

In South Africa, where just 35 per cent of people are fully vaccinated, the variant has begun to spread rapidly. A number of other factors could also be contributing to the rising caseload. Researchers are also working to determine if the mutations make the variant more easily transmissible or if it has a mechanism that allows the variant to escape a natural or vaccine-acquired immune response.

At a news conference on Friday, Ian Sanne, an infectious-disease specialist who is a member of South Africa’s Ministerial Advisory Council on COVID-19, said that “Overall, we do think it’s more transmissible.”

Thus far, several dozen cases have also been identified in Botswana, Hong Kong and Israel, and one found in Belgium according to Health Minister Frank Vandenbroucke.

But officials from a number of countries warn that the variant, also known as B.1.1.529, may already be spreading undetected.

The United Kingdom on Friday reported that while there are no detected cases there, the variant’s large number of mutations “are likely to be biologically significant”.

Scientists have cautioned that while more cases are expected to crop up, it’s unclear if the variant will match the reach of the Delta variant, by far the world’s most dominant, according to the WHO.

What do we know about the variant?

While there’s much to still learn, scientists have confirmed some important details.

For one, its genetic profile is unique from other circulating variants, meaning it represents a new lineage of the virus.

The new variant is distinct from other variants in another critical way: There’s a greater number of mutations. The “very unusual constellation of mutations,” with more than 30 in the spike protein, is a “concern for predicted immune evasion and transmissibility,” said Tulio de Oliveira, director of the Centre for Epidemic Response and Innovation in South Africa.

But the wide array of mutations doesn’t necessarily make the variant a greater threat, according to experts, who caution that more research is needed.

“The one good news, if there’s any good news, is that this variant, the B.1.1.529, can be detected by one particular PCR assay,” de Oliveira said at a news conference, meaning diagnostic labs can quickly identify the new variant rather than having to rely on whole genome sequencing.

However, scientists caution that several of the mutations could raise concerns.

Jesse Bloom, a virologist at the Fred Hutchinson Cancer Research Centre who has conducted mutational scanning experiments for the B.1.1.529 variant, noted that three mutations of the variant could make the virus a more elusive target for antibodies produced through vaccines or prior infection.

“What that’s going to mean for how likely people are to get infected, even they’ve been vaccinated, it’s too early to say,” Bloom said, noting that more traditional experiments should provide more data. “But having a drop in the antibody neutralisation is never a good thing.”

What’s being done about it?

Within days of the discovery of the variant, some counties began imposing travel restrictions to and from South Africa and its neighbours.

Britain, Singapore, Japan and Israel announced travel bans or quarantine rules for air passengers arriving from the southern African region. The European Union and the United States have also announced restrictions on flights from southern Africa.

The US restrictions will apply to travellers from South Africa, Botswana, Zimbabwe, Namibia, Lesotho, Eswatini, Mozambique and Malawi. They do not apply to American citizens and lawful permanent residents. President Joe Biden, in a statement, said the move was “a precautionary measure,” and urged Americans to get vaccinated and get booster shots.

“If you have not gotten vaccinated, or have not taken your children to get vaccinated, now is the time,” he said.

Officials in South Africa expressed concern about the travel bans. Health Minister Joe Phaahla characterised them as a “draconian reaction”.

“It really doesn’t look scientific in any way,” he said. “That kind of reaction is quite a knee-jerk and panicked and almost wants to put a blame on other countries rather than work together.”

Do we know if vaccines are effective?

Even if the variant limits the effectiveness of vaccines, it’s unlikely to completely subvert the protections that vaccines provide, experts say.

“My expectation would be that the mutations in this variant are not going to ablate or completely escape that type of antibody neutralisation” from vaccines or prior infection, Bloom said.

“Regardless of whether or not this new variant ends up spreading, I would suggest that people do what they can to minimise their chances of getting infected with SARS-CoV-2,” Bloom added, referring to the virus by its technical name. “There are certain obvious things you can do: Get vaccinated, get a booster vaccination, wear a mask.”

Though the sample size is still small, Sanne said physicians have seen a higher rate of breakthrough infections among those previously vaccinated in South Africa. But he added that initial data indicated the vaccines were still proving effective, with the majority of hospitalisations being among those who hadn’t gotten the shot.

“We have every indication that the vaccines are still effective in preventing severe disease and/or complications,” he said. “The data, however, is small and early.”

Meanwhile, vaccine-makers, which have done preliminary research using vaccines with formulas tailored for other variants, are keeping an eye on the Omicron variant.

“In the event that vaccine-escape variant emerges, Pfizer and BioNTech expect to be able to develop and produce a tailor-made vaccine against that variant in approximately 100 days, subject to regulatory approval,” a Pfizer spokesperson said in a statement.

Given the spread of B.1.1.529 in South Africa, several experts have pointed to the critical need to vaccinate underserved countries to bolster the world’s protection from future, more-evasive variants.