A police officer who offered to have sex with a woman he met on a dating app in his patrol car has been sacked from the force.

Former PC Andy Ross, 42, was dismissed after a hearing found that he breached professional standards by engaging in sexual conduct and inappropriate behaviour while on duty.

The inquiry heard that the Wiltshire Police officer contacted the woman – known as Ms X – last year after noticing her dating profile online, where she said she ‘liked uniforms’.

He sent a picture of himself in uniform to prove he was a police officer before using his personal mobile to arrange to meet her. 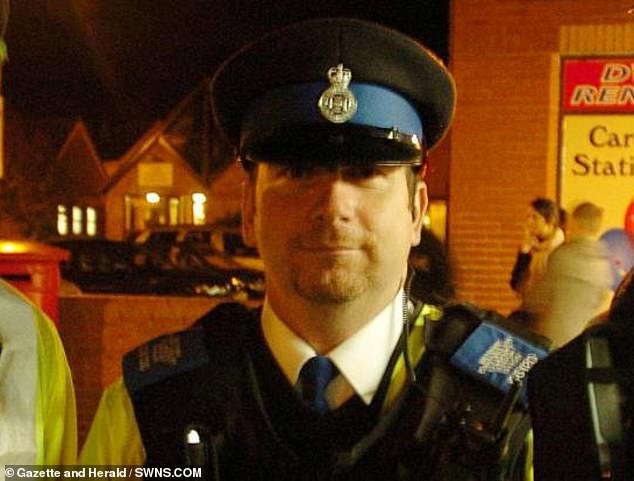 Former PC Andy Ross, 42, who worked for Wilshire Police, was dismissed after a hearing found that he breached professional standards

PC Ross and Ms X then met at around 10pm on June 13 after he drove to her house in a marked car – at her request.

He picked her up in the vehicle and parked up in an isolated location, where they spoke with each other, kissed and hugged.

The couple also talked about what Ms X would say if anyone spotted her with a police office and PC Ross suggested she could say she’d lost her dog and he was helping her look for it, the inquiry heard.

Seven weeks later, while on duty, the officer swapped a series of sexual messages with the woman – including suggesting they could have sex in his police car.

He then picked her up from home at 10.54pm on August 6 while on duty in Chippenham, Wiltshire, and drove to an isolated location.

They parked up for ten minutes, engaged in a conversation, kissed and hugged. He dropped her off at home at around 11.15pm.

They again spoke about what Ms  X could say if anyone asked why she was with the officer and PC Ross suggested she say she had gone to the police station to make a witness statement.

He went on to collect a witness information notice from the boot of his car to aid the lie.

Barrister Alice Meredith, for Wiltshire Police, said the constable’s actions had brought discredit on the police service and would have undermined people’s confidence in the force.

He was accused of neglecting his responsibilities as a police officer and breached a specific point in the force’s code of conduct stopping officers from engaging in sexual conduct or inappropriate behaviour while on duty.

She said: ‘The officer wished to meet with Ms X having been interacting with her on a dating website.

‘Having expressed an interest in uniforms and, prior to the second meeting, discussed engaging in sexual activity involving the use of a police car, Ms X and the officer made arrangements to meet whilst the officer was on uniformed duty and using a marked police vehicle. An inquiry heard that PC Ross  drove to the woman’s house in a marked car, picked her up in the vehicle and parked up in an isolated location. (Stock image)

‘The officer sent a photograph of a marked police vehicle he was driving, drove near her home in that vehicle and then collected her and met with her in that vehicle whilst on uniformed duty.

‘These actions compromised and abused that position.’

It also emerged that PC Ross, who joined the force in 2008, had twice been slapped on the wrist by bosses previously.

It was said that he was given a 12 month written warning for using his police car to take himself to a private hospital appointment without the permission of his bosses in 2013.

And he was also given an 18 month written warning after a number of allegations were proven against him, including that he spent an excessive amount of time while on duty communicating with a woman.

Ms Meredith added: ‘The officer was well aware this type of behaviour constituted misconduct. He was well aware he could and would be sanctioned for this.’

Admitting gross misconduct, PC Ross told the panel: ‘I deeply regret the actions that I took in putting Wiltshire Police, my family and myself in such a position.

A three-member panel took 90 minutes to come to its decision to dismiss PC Ross without notice at the force’s headquarters in Devizes, Wiltshire.

Chairman John Bassett said: ‘The panel have considered the facts of this case to be extremely serious.

‘Although neither of the previous outcomes that have been imposed upon you were live at the relevant time it is apparent to the panel that you haven’t learned from the previous times you breached the standards.’