‘I was afraid I would die’: Woman, 22, describes how coronavirus left her crawling to the bathroom to vomit, struggling for breath and lying in a pool of her own sweat

A Wisconsin woman who tested positive for Covid-19 described how she went to the emergency room at least twice and suffered from several troubling symptoms.

Amy Shircel, 22, revealed her diagnosis to Twitter users in a thread that has since gone viral with more than 214,000 likes.

It’s not clear when Shircel first began feeling symptoms, but it started sometime after she finished a trip to Europe. 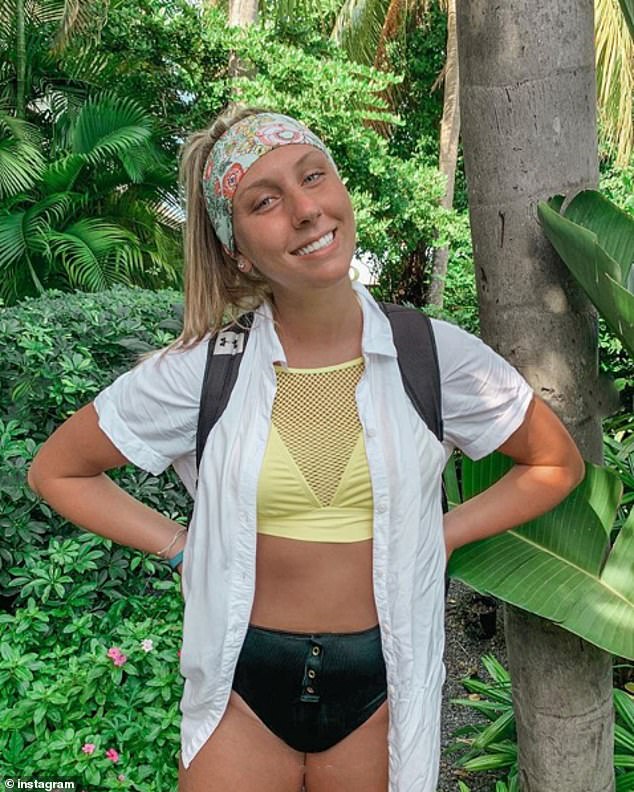 Pictured: Amy Shircel, 22, of Wisconsin revealed she tested positive for Covid-19 in a viral Twitter thread  after traveling to Europe

She said: ‘The first couple of days of symptoms were manageable. I had a fever, a mild cough, chills, headache, runny nose. Since I had been to Europe, they allowed me to get tested my second day of symptoms.

But as the days went on, Shircel’s symptoms became worse. She had trouble eating, sleeping and would later receive her positive test results.

By that point, she was experiencing shortness of breath, vomiting and an elevated, feverish temperature of 102.

‘By the third day, I couldn’t keep anything down. I was vomiting constantly. I couldn’t sleep, I obviously couldn’t eat. At this point, I still didn’t have my test results back,’ she wrote.

Shircel said the first two days of her symptoms were ‘manageable’, with chills and a mild cough

Shircel: ‘test back positive. I developed shortness of breath. It’s scary, it feels like your lungs are shallow and you can’t take a proper breath’

‘4th day: test back positive. I developed shortness of breath. It’s scary, it feels like your lungs are shallow and you can’t take a proper breath. I was weak, had a 102 degree fever and rising.’

Shircel said the coronavirus symptoms became so bad that she was ‘genuinely afraid [she] would die’ and had never experienced an illness like this.

She recalled how by her six day of illness, she’d become so weak she was forced to crawl to the bathroom and was taken to the emergency room. 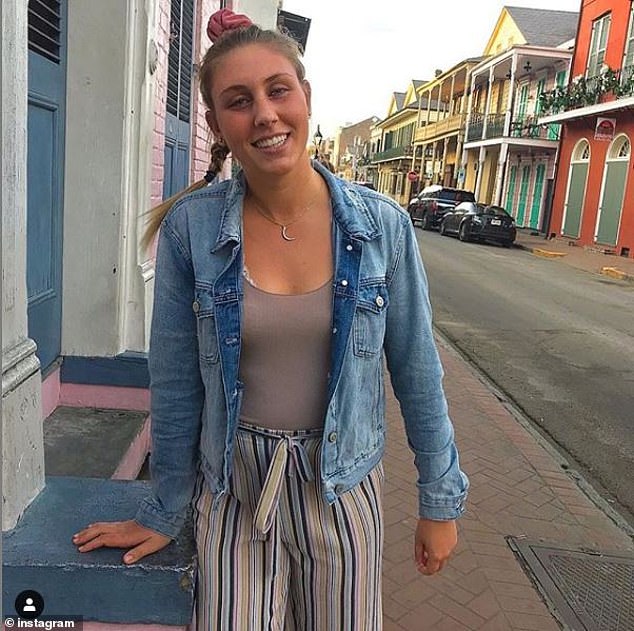 ‘By the 6th day of symptoms, I was so weak I couldn’t even walk. I crawled to the bathroom to vomit. I became so dehydrated I called 911, and they took me in an ambulance to the emergency room,’ she said.

‘I stayed there for a day where they rehydrated me and got me some anti nausea meds,’ she added.

After returning home from the emergency room, Shircel unfortunately went back during a five day period. 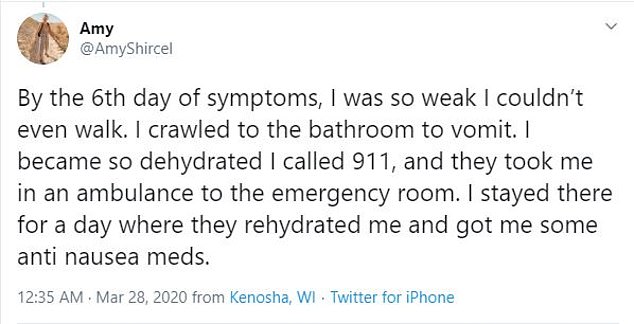 She described feeling exhausted and that she couldn’t properly eat for nine days.

‘7th-11th day of symptoms: ER again. I had never been that weak or fatigued by fever in my life. I either violently shivered in bed all day, or would wake up in a literal puddle of my own sweat. I couldn’t eat for 9 days. I was completely miserable,’ she said.

As of Saturday, Shircel entered her twelfth day of having Covid-19 and has luckily regained her appetite – despite still having ‘all the major symptoms’.

Schircel finished her thread by revealing that a coronavirus diagnosis is ‘dehumanizing’ and that young age doesn’t make anyone ‘invincible’ from the disease.

Shircel: ‘I either violently shivered in bed all day, or would wake up in a literal puddle of my own sweat. I couldn’t eat for 9 days. I was completely miserable’

Shircel: ‘A coronavirus diagnosis is dehumanizing and lonely, and I wouldn’t wish it upon my worst enemy. You aren’t invincible just because you’re in your 20s’

‘A coronavirus diagnosis is dehumanizing and lonely, and I wouldn’t wish it upon my worst enemy. You aren’t invincible just because you’re in your 20s. Take it from me, and quarantine like your life depends on it (it might),’ she said.

Several people responded to the thread with well wishes, stories of their own experience testing positive for coronavirus and praise for spreading awareness.

One user who claims to be a health care worker applauded Shircel for using her platform to educate about coronavirus.

‘Thank you for this tweet. I am a health worker and it’s vital for me and the people I work with that people stay home and take this seriously. I hope you get well soon,’ he said.

The Center for Disease Prevention and Control said that although any can become infected, those who are elderly, have respiratory problems or underlying medical conditions could face more serious complication from Covid-19.

However, Shircel’s thread is an example of a young adult experiencing severe symptoms.

Shircel’s story comes as confirmed cases in the United States reached 131,824 and 2,336 deaths as of Saturday night. 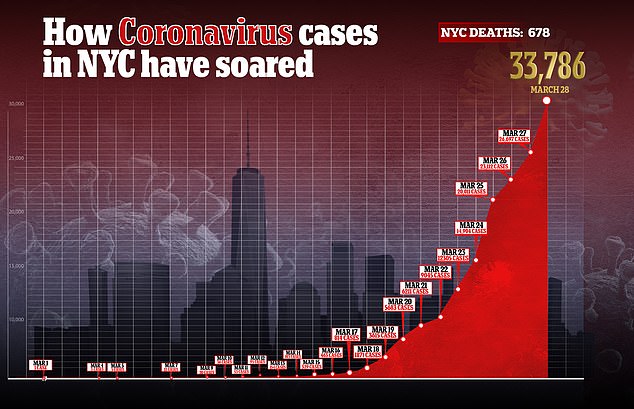 As of Sunday, New York City has amassed 33,786 confirmed corornavirus cases with 678 deaths

‘This virus is transmitted by droplets and close contact. Droplets play a very important role — you’ve got to wear a mask, because when you speak, there are always droplets coming out of your mouth,’ George Gao, who works with the Chinese Center for Disease and Prevention, told Science Magazine.

‘Many people have asymptomatic or presymptomatic infections. If they are wearing face masks, it can prevent droplets that carry the virus from escaping and infecting others,’ Gao said.

In Asia, masks have become commonplace during the outbreak, but Americans were advised to only don them if they were already sick.

KK Cheng, a public health expert at the University of Birmingham in the UK, thinks it’s common sense that wearing a mask would help protect more people from contracting coronavirus.

‘Just imagine you’re traveling in the New York [City] subway on a busy morning. If everyone wears a mask, I’m sure that it would reduce the transmission,’ Cheng said.

He continued: ‘It’s not to protect yourself. It’s to protect people against the droplets coming out of your respiratory tract… I don’t want to frighten you, but when people speak and breathe and sing —you don’t have to sneeze or cough — these droplets are coming out.’

Another expert says if it’s practical for doctors and nurses to wear masks to protect themselves from viruses, then why wouldn’t the same logic apply for everyone else?

According to the CDC, the following are listed symptoms for Covid-19:

They say that older adults or people with severe underlying medical conditions could be at a higher risk of developing serious complications.

The symptoms may appear between two to 14 days (based on the incubation period of MERS-CoV viruses).

The CDC advises seeking medical attention when symptoms include:

It should be noted that the list is not all inclusive and concerned individuals should consult medical providers for other symptoms that are concerning.

‘It doesn’t make sense to imagine that … surgical masks are really important for health care workers but then not useful at all for the general public,’ Benjamin Cowling, an epidemiologist at the University of Hong Kong, told Science Magazine.

‘I think the average person, if they were taught how to wear a mask properly … would have some protection against infection in the community.’

Dr. Adams made a plea to the general public on Twitter: ‘Seriously people- STOP BUYING MASKS! They are NOT effective in preventing general public from catching #Coronavirus, but if healthcare providers can’t get them to care for sick patients, it puts them and out community at risk.’

But warnings like these are meant to prevent a shortage of masks for medical professionals. Some hospitals have run so low on supplies they’re accepting home sewn masks from volunteers.

In Tennessee medical staff were warning they may have to use diapers as an alternative to masks while researchers from Duke University have found a way to sanitize the N95 masks to make them reusable during the shortage.

The fear over spreading infections, dwindling medical supplies and the growing number of positive diagnoses may have been what prompted President Donald Trump to consider quarantining New York.

Trump announced Saturday that he may place a quarantine on New York due to its place as a coronavirus hotspot,

Within hours, Cuomo blasted the proposal in strong terms. ‘If you start walling off areas all across the country it would just be totally bizarre, counter-productive, anti-American, anti-social,’ said Cuomo in an interview with CNN on Saturday evening.

‘This is a civil war kind of discussion,’ Cuomo said of the proposal. ‘I don’t believe that any administration could be serious about physical lockdowns of states.’

Cuomo said that it would probably be illegal to quarantine New York, as well as totally ineffective, given the rise of other virus hotspots in the country such as New Orleans. 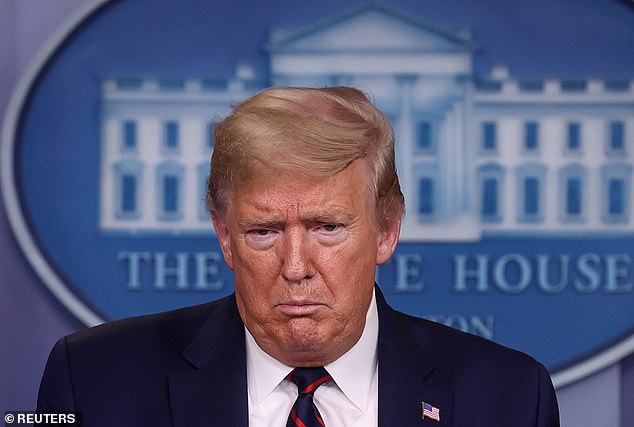 President Trump (pictured) said Saturday that New York could be quarantined, but later said a travel advisory would be issued instead 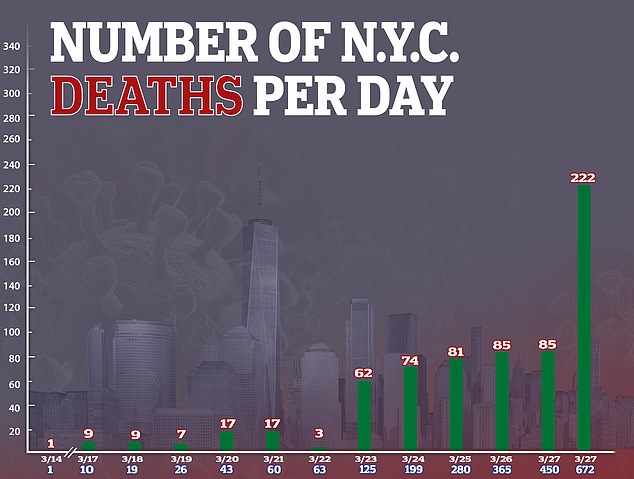 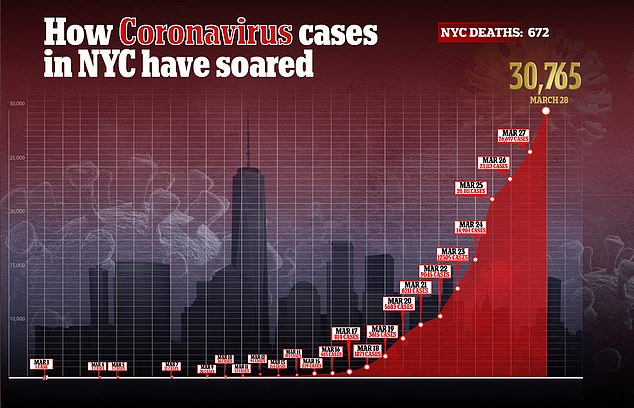 In New York City alone, there are at least 30,765 confirmed coronavirus cases and around 672

‘It makes absolutely no sense and I don’t think any serious governmental personality or professional would support it,’ Cuomo said.

Trump later backpedaled and instead ordered a travel advisory.

‘A quarantine will not be necessary. Full details will be released by CDC tonight. Thank you!’ he continued. On Saturday night, confirmed cases of coronavirus hit 123,788 and deaths surpassed 2,100 nationwide, with 672 deaths in New York City alone.

The Centers for Disease Control and Prevention issued the advisory late on Saturday, saying: ‘Due to extensive community transmission of COVID -19 in the area, CDC urges residents of New York, New Jersey, and Connecticut to refrain from non-essential domestic travel for 14 days effective immediately.’

The advisory does not apply to employees of critical infrastructure industries, ‘including but not limited to trucking, public health professionals, financial services, and food supply,’ the CDC said.

The agency said that the governors of New York, New Jersey, and Connecticut will have ‘full discretion’ to implement the advisory.