A WOMAN shared a nightmare series of texts she was sent after she canceled date because of a "bad feeling."

TikTok users agree she "dodged a bullet" as she shared the text chain where the man hurled insults at her after she said she wasn't up for going out. 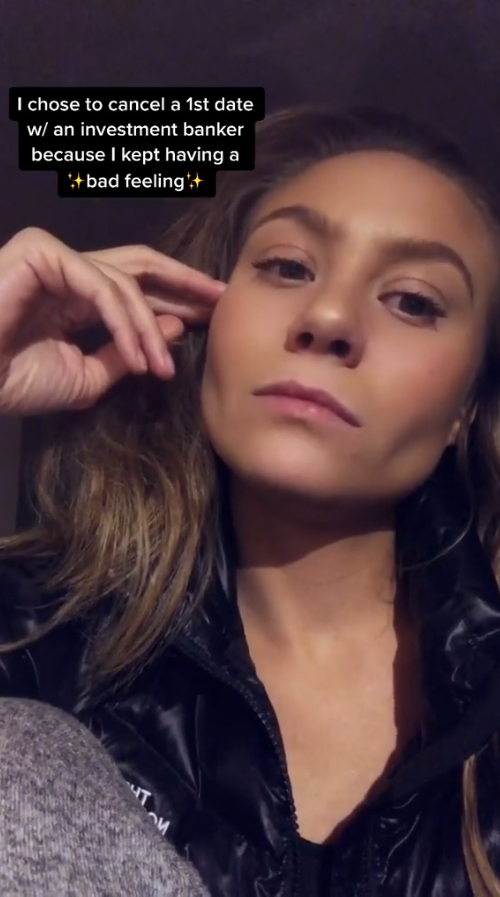 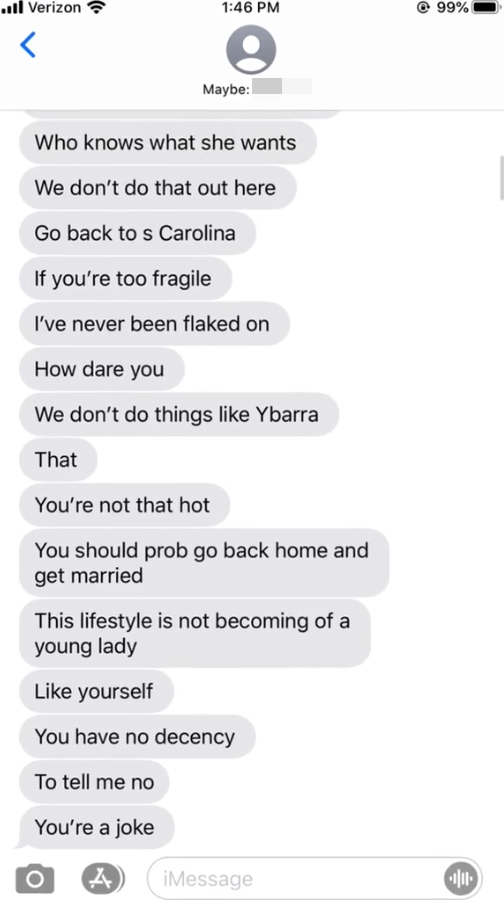 The text chain was shared by user @sadzmadz, whose name is Madz according to her profile.

The TikToker shared a clip of her face in the beginning of the video, with the text: "I chose to cancel a 1st date w/an investment banker because I kept having a bad feeling."

She showed screenshots of the texts her date  that left users flabbergasted.

He told her "you're delusional," as he continued to hurl insults at her.

A blue message bubble shows she messaged him: "I'm sorry you feel that way. I think you're intoxicated, so I'd appreciate if you would stop texting me. 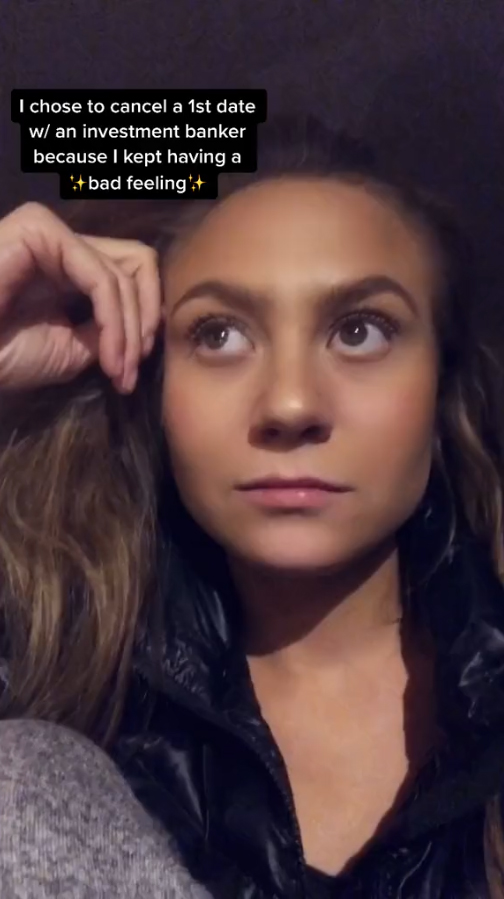 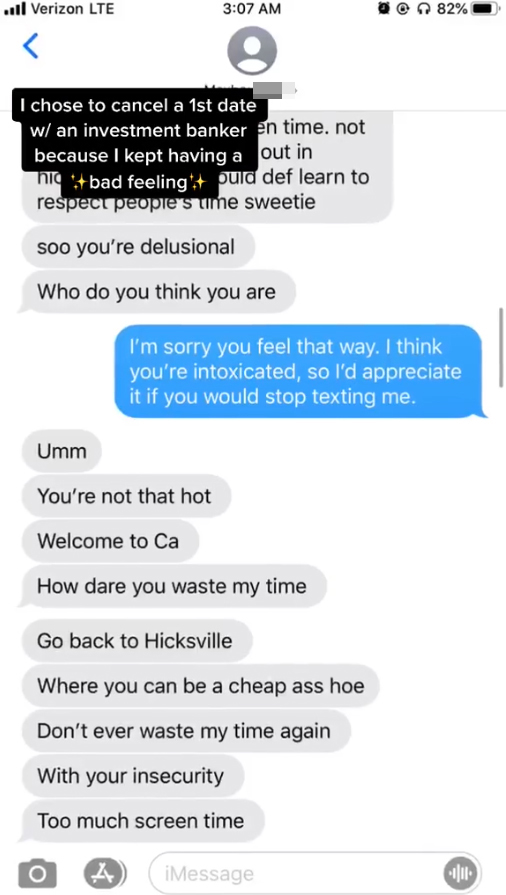 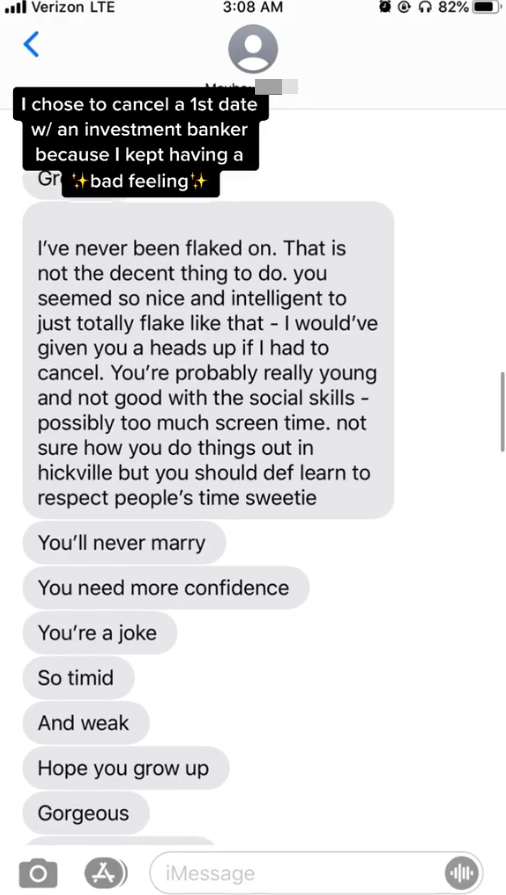 The man then went into a fury, as he sent a series of messages with cruel messages.

"You're not that hot," one of his messages said.

"How dare you waste my time," he accused her.

Another of his messages said she's "probably really young and not good with social skills."

He continued to fire off messages, telling Madz: "You'll never marry," "You need more confidence," and "You're a joke."

He also suggested she had "too much screen time."

As Madz appeared to not respond to any of his messages, the texter accused her of being "fragile" and said she has "no decency."

Madz said she "dodged a bullet" as she shared a final snap of the text chain. 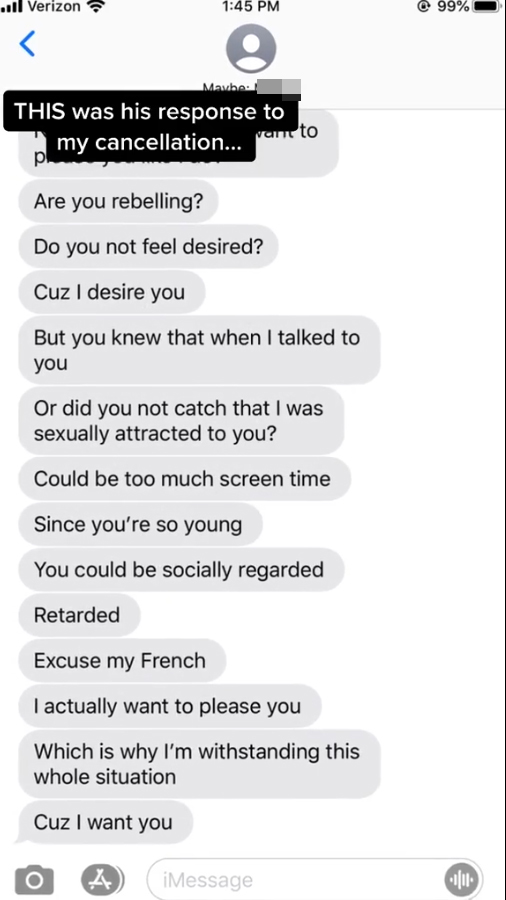 Users were flabbergasted at the man's behavior.

"Honey you didn't dodge a bullet, you dodged an entire tank," one user wrote.

"There is nothing more fragile than a man's ego," one user wrote.

One user said she thinks Madz "dodged more than just a bullet," and the TikToker agreed.

"I know… I'm sure I wasn't the first one he spoke to that way, and I sadly won't be the last."

Most read in Lifestyle

Mum's agony after son, 5, 'stabbed to death' as cops quiz woman on murder

Screams heard after boy, 5, 'stabbed' to death as woman, 49, arrested

In other nightmare stories, one woman shared "creepy" messages she received from a man who wanted an apartment share.