Superfit former gymnast, 58, who sued for more than £150,000 after smashing her leg in fall on Bear Grylls obstacle course loses High Court legal fight for damages

A super-fit accountant who sued for more than £150,000 after suffering serious injuries during a Bear Grylls Survival Race has lost her High Court damages battle.

Margot Harrison, 59, of west London, was left with leg and shoulder injuries after taking part in a 5km obstacle course designed by Mr Grylls in Enfield, north London, in October 2016.

The former gymnast sued the race organiser and a subcontractor after she fell from monkey rings, claiming they had ‘failed to take reasonable care for her safety’.

Ms Harrison smashed her right leg and dislocated her shoulder just 15 minutes into the challenge when she launched herself at an ‘elevated monkey ring obstacle’ on the jungle section of the course.

The ground beneath the rings was properly cushioned, they claimed, while race marshals had been briefed to warn racers to attack the rings from a seated position, not while standing as Ms Harrison had done.

In a ruling published on Thursday, judge Jeremy Freedman concluded the accident was ‘not occasioned by any fault on the part of the defendants’. 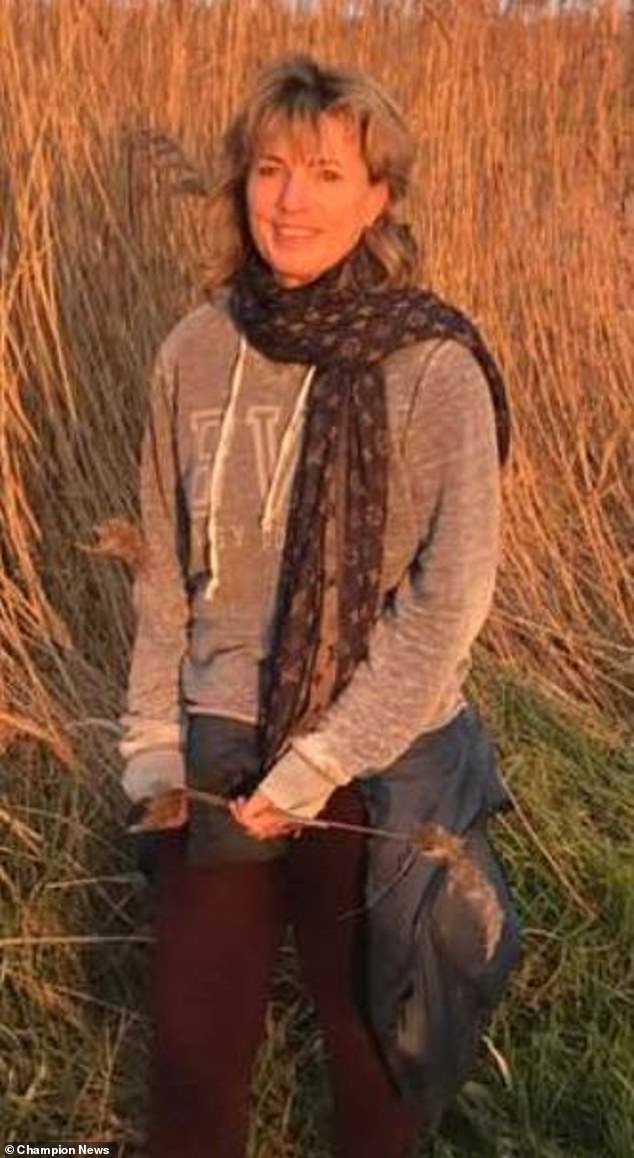 After considering evidence from an online High Court trial in July, he said: ‘This was a most unfortunate accident resulting in very serious injuries. It goes without saying that the claimant is deserving of much sympathy.

‘I am satisfied, however, that her accident and the resultant injuries were not occasioned by any fault on the part of the defendants.

‘Accidents of this type are an inherent risk of participation in activities such as obstacle races; and no amount of care and vigilance on the part of the organisers and planners of such events can eliminate the possibility of such risks materialising from time to time.’

It was ‘created by TV personality Mr Grylls and his crack team of survival and obstacle course racing enthusiasts’ to test runners’ ‘ability to endure a range of real-world survival scenarios,’ according to publicity material.

Judge Freedman ruled that Ms Harrison was aware of a risk when signing up to Mr Grylls’ intense obstacle course and had signed an ‘indemnity’. TV personality and former SAS soldier Mr Grylls did not feature personally in the judge’s ruling.

He added: ‘The claimant elected to participate in the Bear Grylls race and, whilst, of course, she did not expect to suffer any injury when doing so, nevertheless, it was a risk of which she was well aware when she registered for the event and signed the indemnity. 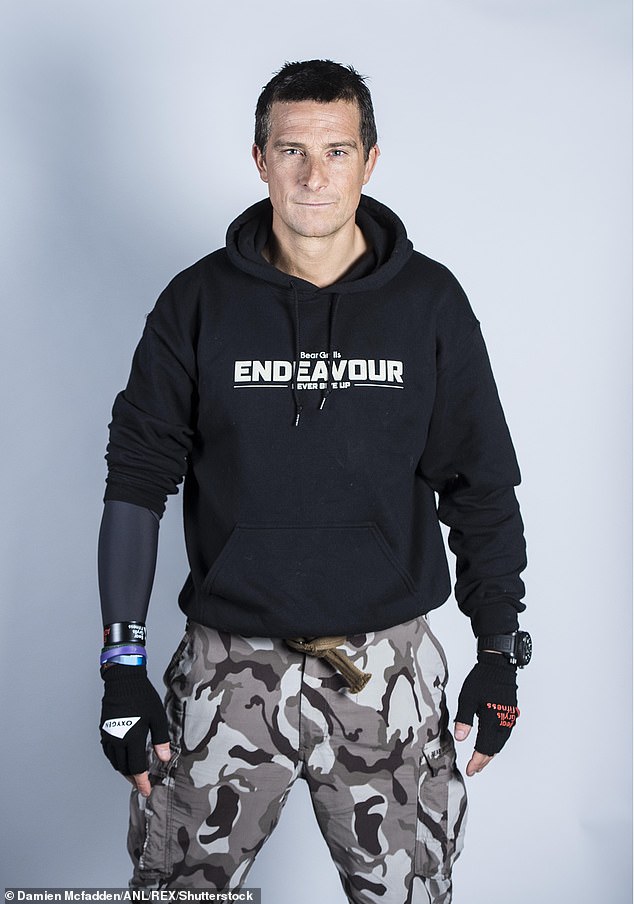 The ex-gymnast sued the race organiser and a subcontractor after she fell from monkey rings on Mr Grylls’ (pictured) course, claiming they ‘failed to take reasonable care for her safety’ 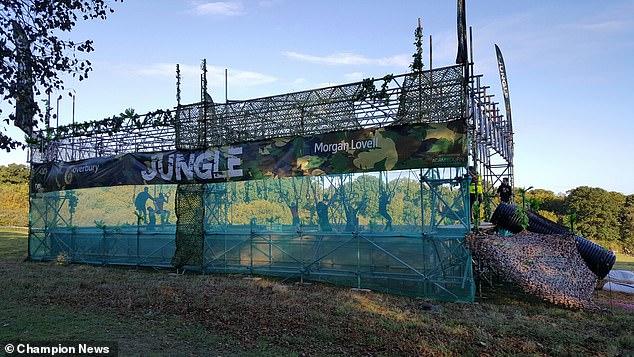 ‘Her confidence in her ability to complete this obstacle was not misplaced; it was simply a matter of grave misfortune that she was the victim of a serious accident.’

Ms Harrison can only walk a couple of miles before starting to limp and she also suffered depression after her accident.

She claimed those marshalling the race negligently failed to adequately supervise the course and that safety measures should have been taken to ensure the ground was padded where she fell.

The judge said most participants had fallen off the monkey rings at some stage, saying: ‘The vast majority, of course, suffered no injury but, in the end, it is a matter of chance as to how well or badly an individual may land on the ground.’

The Bear Grylls Survival Race is held in Trent Park, Enfield, with the event launching itself under the slogan ‘Heroes Are Made Not Born’.

It features four levels of difficulty, ranging from the kids’ race for under-13s to Ultimate survivor level.

The race’s website says it hosts ‘survival challenges designed to cater to all abilities,’ adding ‘we can all develop our own wilderness warrior spirit and physicality, for real’.

The 5K race is advertised as ‘the perfect course for those who may be new to the survival world but want to release their inner Bear and smash fitness goals along the way’.

London’s High Court heard in July that Ms Harrison was a fitness enthusiast before her accident, entering the Bear Grylls challenge alongside other members of her local gym.

Her personal trainer had ‘every confidence’ that she would crack the challenge, she told the court in July, adding: ‘We thought it would be a nice thing for a group of gym members to do something like this together.

‘I had visions of us supporting each other going down the obstacles, but obviously sadly that didn’t happen.’

She said she had trained specifically for the physical demands of the course, but did not expect there to be a risk of serious injury involved.

‘I thought it was a 5km run with 20 obstacles along the way and it would just be a challenge of my physical strength, and I thought it was something I was going to enjoy,’ she said. 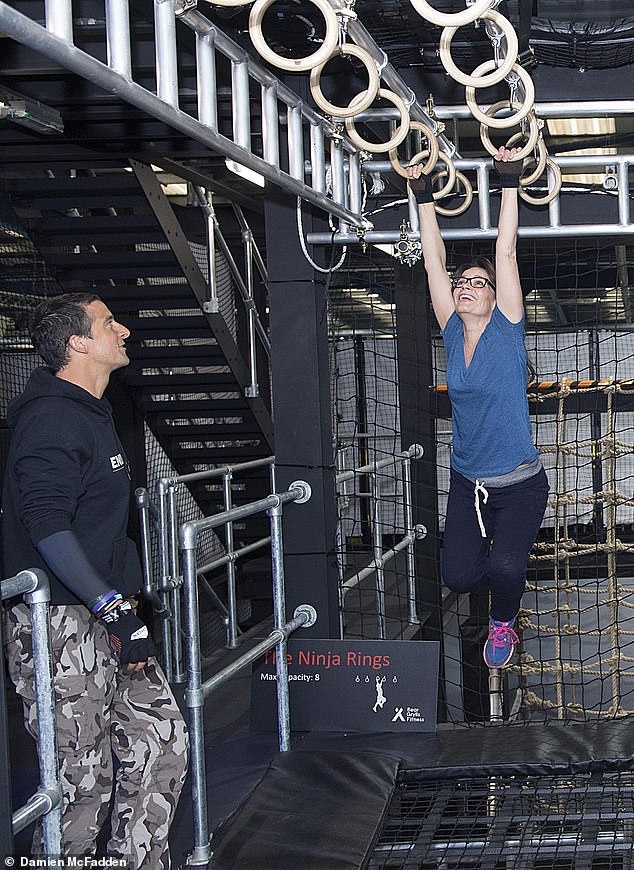 In a ruling, a judge said the accident was ‘not occasioned by any fault on the part of the defendants’. Pictured: Mr Grylls coaches a woman through monkey rings on an assault course

When she reached the platform in front of the monkey rings, there were two marshals in place, said Ms Harrison, but neither of them instructed her to tackle the rings from a seated position.

‘People were going from standing and I assumed that was the right starting position,’ said Ms Harrison, and so she launched herself from the platform while upright.

‘There was a shock to my shoulder and that’s when I let go.

‘I think I had one hand on the first ring and I was reaching for the second ring – it all happened so fast.

‘What I expected was that the landing surface would be sufficient to cushion my fall – that surface was very hard.’

The accountant needed multiple operations to treat her injuries, and was unable to walk her dog or tend to her garden due to the effects of the October 2016 accident.

Although she fought back to stage a ‘remarkable level of recovery’, she cannot now lift heavy objects and suffers from ‘ongoing permanent symptoms’ that may require further surgery.

A surgeon who later treated her told Ms Harrison that the top of her shin bone looked like a ‘digestive biscuit after somebody had stamped on it’, she added.

Unknown to Ms Harrison, there had been two previous injuries on the same obstacle at two other race venues, said her barrister, Brian Cummins.

‘Thus, prior to her injury, they were aware – or ought to have been aware – the monkey rings obstacle had given rise to two previous serious injuries, and was a real risk to its race participants,’ he added.

In fact, he argued, as a survival novice Ms Harrison should never have been allowed to tackle such an obstacle.

‘Ms Harrison entered to participate in the 5K race for the less experienced over-14s,’ he said. 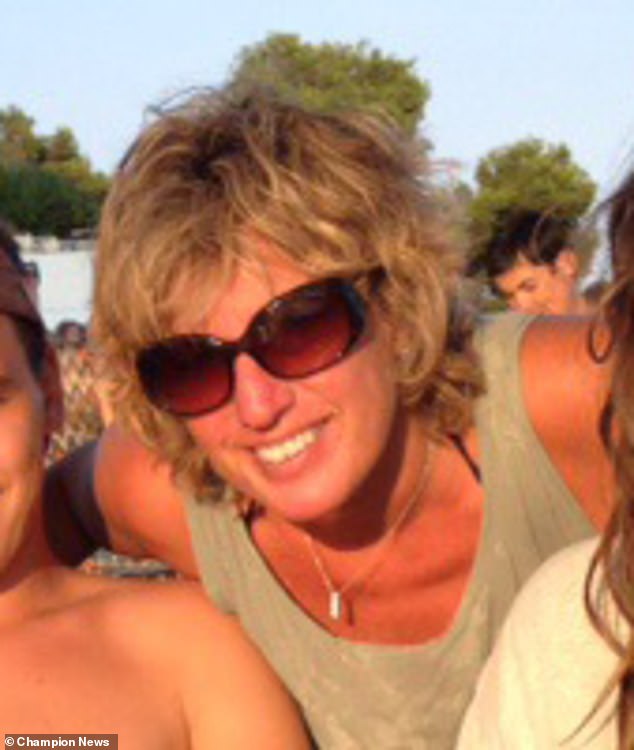 ‘It is averred that she should not have even been exposed to “The Jungle”.’

But the organisers said race marshals were carefully briefed to warn racers to attack the monkey bars from a seated position, but it was the individual’s choice how to launch.

Neither company could be blamed for those who chose not to follow the instructions, the Intuitive Business Consultants and Big Bang Promotions previously claimed.

The obstacle was designed so that most competitors’ feet would be no more than 40cm above the grass and straw surface when they swung, and the straw was also redistributed between waves of racers to ensure it was even, organisers said.

All participants also had the option to ‘forfeit’ any element of the challenge and were briefed that they were only competing against themselves.

‘Whilst it is unfortunate that Ms Harrison suffered injuries, this was not due to any negligence on the part of Intuitive Business Consultants or Big Bang Promotions International and it is simply the result of the inherent risk associated with this type of adventurous activity,’ Big Bang’s QC, Angus Withington previously said.

Mr Grylls, who did not feature personally in the judge’s ruling, is described on his website as ‘one of the most recognised faces of survival and outdoor adventure’.

A ‘message from Bear Grylls’ on his Survival Race website says: ‘The Bear Grylls Survival Race is not designed to be a one-off event – it is a starting point on a great journey to a stronger, healthier, more determined, and more battle-hardened you.

‘If you can complete and conquer one of our events, then you will have earned the right to call yourself a BG survivor.’